Jake and the Never Land Pirates Wiki
Register
Don't have an account?
Sign In
Advertisement
in: Pirate ships, Transportation

The Leaky Beak is a small red ship formerly belonging to Wise Old Parrot featured in the Disney Junior animated series, Jake and the Never Land Pirates. It was once lost in a huge storm and crashed on Shipwreck Beach. It was later found and restored by Jake and his crew while sailing near Shipwreck Beach.

The Leaky Beak first appeared in the episode "Sail Away Treasure" while sailing through the waters near Shipwreck Beach Jake and his crew took a shine to the old shipwreck especially Skully who always wanted a ship of his very own he named the ship "Leakey Beak". Jake and his crew then decided to repair the old ship until she was good as new in the process they discover a treasure map leading to a treasure hidden on Never Peak mountain on the sail of the ship which Captain Hook wanted but he'd had to catch the sea pups first,as the Leaky Beak had built in wings and took flight prompting Hook into wanting it more with his Whirly-Hook on hand he and Mr. Smee quickly follow the puny pirates to Never Peak.

On Never Peak mountain the sea pups discover the treasure but it was locked and decided to head to SkyBird Island to find out about the treasure .They learned that the Leaky Beak once belonged to Wise Old Parrot. Captain Hook swipes the Leakey Beak along with the treasure but Wise Old Parrot wasn't to upset about the treasure was a bird-call that summons the Feathered Four the guardians of SkyBird Island swooped down and plucked Hook the ship in a attempt to rescue his captain Smee pulls the lever retracting the ship's wings sending Smee and the Leaky Beak falling from the sky only to be rescued by Izzy and her Pixie Dust. Thwarted yet again by Jake and his crew Hook and Smee head back to the Jolly Roger. Skully along with his mates return the Leaky Beak to Wise Old Parrot but he gives the ship to Skully. 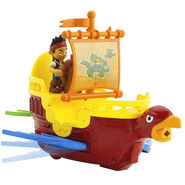