King of the Monkey Pirates

To take over Pirate Island, to gain a ship of his very own (failed)

Force to abandon Pirate Island to reclaim his banana treasure with the rest of his crew.
Reclaims control of the Jolly Roger.

"Still trying to get your ship back I see."
"I heard there's a hideout here that's a safe place for hiding treasure!"
"Crazy, huh? [chuckles] Ook, ook."
" Zongo! King Zongo! I'm a pirate, a king, and a captain, isn't that crazy?! Ha-ha!"
"Sorry, this Hideout is gonna make one rockin' monkey palace!"
"I couldn't hear you because... you're leaving!"
"They're coming back?! Now this really twists my tail."
" My lovely treasure! [chuckles] Oh, how I've worked to collect you."
"Nobody gets King Zongo's treasure!"
" OK! I promise! I monkey promise! Now let them go!"
" I apologize in advance for the emotional outburst you're about to see."

King Zongo is a minor recurring antagonist featured in the Disney Junior series Jake and the Never Land Pirates. He is the ruler of the pirate monkeys who thrive on Never Land. He is voiced by Chris Kattan.

King Zongo is a rowdy talking monkey who was crowned by the Pirate Monkeys as their king. Much of his background is shrouded in mystery. He is one of few Pirate Monkeys who can speak.

Zongo tends to be very loud and energetic. He dreams of finding the perfect hideaway to guard his golden monkey treasure and soon learn the perfect place Pirate Island. But after his defeat at the hand of Jake and his crew during his debut, Zongo now desires a ship fitting for himself and his crew.

King Zongo first appeared in the episode "The Monkey Pirate King", he and his crew of monkey pirates take control of the Jolly Roger in order to reach Pirate Island. Meanwhile Captain Hook and his crew soon arrive on Pirate Island by rowboat to reclaim the ship, but are quickly captured in a net. King Zongo mock Hook for his efforts before setting eyes on Pirate Island as his new palace. King Zongo and his forces soon outnumber Jake and his crew casting them out of their hideout. Not one to give up Jake and his mateys soon storm the hideout but King Zongo the various defenses the young pirates plan on Captain Hook on them. Things look bleak for the young pirates until Jake realizes they could sneak back into the hideout through Bucky's Grotto. Back inside Jake and his crew devised a plan to rid there island home of King Zongo and his forces for good. The young pirates exploit Zongo's weakness for treasure the causing the monkey king through the bowls of Pirate Island. King Zongo was soon defeated by Jake and his crew but the silly monkey refused to give up until Jake revealed Zongo's floating treasure chest flying away thanks to Izzy's pixie dust. Zongo pleaded with Jake to release his minions to allow him to reclaim his treasure, Jake agreed to let Zongo and his crew free if they promise to leave Pirate Island and never return. Zongo reluctantly agrees to Jake's terms and he and his band of monkeys are set free to reclaim the treasure.

King Zongo and his crew reappear in the episode "Monkey Tiki Trouble", still longing for a ship for himself he follows Captain Hook and his crew from the treetops, as Hook and crew search for the legendary golden Monkey Tiki of Monkey Picchu. When Zongo attempts to steal the idol from Hook the powers of the Monkey Tiki is released causing both Captain Hook and King Zongo to switch bodies. Zongo took full advantage of Hook's crew who believed he was still Hook allowing Zongo to take control of them. However Jake and his crew manage to help return Zongo and Hook back into their proper bodies. Zongo is last seen as he and his monkey pirates are sent back onto there raft and Hook returns to command of the Jolly Roger. 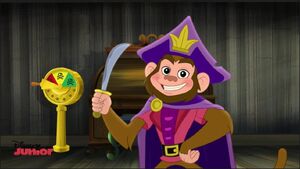 For more pictures and screenshots of King Zongo, click here.

Retrieved from "https://jakeandtheneverlandpirates.fandom.com/wiki/King_Zongo?oldid=90676"
Community content is available under CC-BY-SA unless otherwise noted.