His Majesty
His Royal Highness
Pop (referred to by Crab Louie)

Singing, wisecracks, keeping the Golden Claw safe from Captain Hook,playing with his son,keeping

Becomes friends with Jake and his crews, prevent Captain Hook from stealing The Golden Claw with the help of Cubby and the rest of the crew.

Welcome to King Crab Island over here!
My loyal crabs brought you. You see...
Bot-a-boom!
And we know who you are, Pirate Hero Jake!
My crabs saw you on your ship, acting all pirate-y and hero-y. And besides, you got the sword!
And you're the guy who's gonna help us with our Captain Hook problem.
That thieving snake has been to King Crab Island many times before, you know. And he wants to get his hooks on our treasure, The Golden Claw!
All by yourself? Come on, you got us!

“Oh, I'm a crab of distinction, the shellfish on the throne. I used to be the prince of pinch. Now I'm king of crustaceans, the brass, the boss. I'm the royal claw. ”
―King Crab

King Crab is a character from Disney Junior's television series Jake and the Never Land Pirates. He is a fast talking little anthropomorphic crab and ruler of King Crab Island off the shores of Never Land. He is voiced by Bobby Moynihan.

King Crab is brass,witty and can be a tad impulsive ruler who always has his subjects and island home best interest at heart.He soon learned of the heroic action of Jake who he desperately needed his help protecting his island's precious treasure, the Golden Claw from Captain Hook who has been searching King Crab Island in hopes of capture the Golden Claw for himself. Later during the course of the series it has King Crab has been seen to be bossy and somewhat pushy during his debut and later in the episode "A Royal Misunderstanding ", where he and Queen Coralie egos clash with one another believing each other was in the right and not willing to compile with the wishes of the other until Jake and his friends intervene to help both the king and queen make a compromise. Later in season four introduce King Crab's son Crab Louie who strives to be just a great ruler as his father. But King Crab see his son as still too young and inexperienced to assist at times and is very overprotective of him.

King Crab and his crab subjects first appeared in the episode "Cubby's Crabby Crusade", Cubby stays behind while the rest of the crew gather some food on Never Land,Cubby notice Jake left his sword and began pretending he was Jake unaware a group of pirate crab witness his actions mistaking him for the real Jake soon Cubby nods off and takes a nap in the dingy. While Cubby slept the pirate crabs take him to King Crab Island to meet their king. King Crab introduces himself to Cubby believing he was Jake the young pirate hero he heard about. Cubby’s protests, but King Crab doesn’t believe that he’s not Jake and asks for help to stop Captain Hook from stealing their most precious treasure, The Golden Claw.

King Crab reappears in the episode "Crabageddon!" he is first seen playing with his son Crab Louie on the beach when Doctor Undergear come to King Crab Island to turn the island into his new lair with the aid of his army of Crab Bot minions. King Crab attempt to stop the threat on his own but he is quickly thwarted by the mad doctor leaving his son and subjects to deal with the doctor. King Crab latter returns with the aid of Jake and his crew to free his son, subjects and home from Doctor Undergear and his minions. 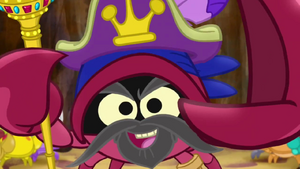 For more pictures and screenshots of King Crab, click here.

Retrieved from "https://jakeandtheneverlandpirates.fandom.com/wiki/King_Crab?oldid=88840"
Community content is available under CC-BY-SA unless otherwise noted.