Start a Wiki
Kevin Hendrickson is a composer and music producer best known for his work on Disney's Jake and the Never Land Pirates. In addition to collaborating with Loren Hoskins on songs and score for Jake and the Never Land Pirates, Kevin provides the singing voice and live-action persona for Captain Hook's able crew-mate Bones. After discovering Kevin and Loren's Portland-based band Captain Bogg & Salty and its avid "pirate rock" fan base, Disney decided to base the character designs for Sharky and Bones after Kevin and Loren's likenesses, additionally casting the two Portland musicians as the live-action versions of their characters. Kevin and Loren appear as Sharky and Bones in closing music videos at the end of many episodes during season 1-3, and have made many live appearances including events at Disney World, Disneyland, and New York's Central Park. As a composer, singer and multi-instrumentalist, Kevin has contributed to other Disney Junior series such as Sofia the First, The 7D, and Jake's Buccaneer Blast. 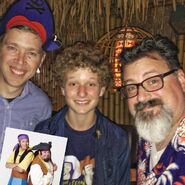 Add a photo to this gallery
Retrieved from "https://jakeandtheneverlandpirates.fandom.com/wiki/Kevin_Hendrickson?oldid=90306"
Community content is available under CC-BY-SA unless otherwise noted.