Jake and the Never Land Pirates Wiki
Register
Don't have an account?
Sign In
in: Characters, Males, Flying Characters,
and 4 more

"Battle for the Book"

John Darling from the novel Peter & Wendy by J.M. Barrie

Puny pipsqueak (refereed to by Hook)

To cross swords with Captain Hook and his pirate crew, returning to Never Land once more

"I say! Jiminy!"
"By Jove!"
"Jolly good fun. We had quite the adventures in Never Land."
"We cannot let that pirate scoundrel get away with this!"
"Pleased to meet you, milady."
"Master Bucky is, how do you say? Awesome!"
"Most curious. Michael has never forgotten Never Land before."
"Pleasure to meet you, sir. I'd love to stay and chat, but Miss Izzy and I are trying to save these pages before Hook..."
"Weird indeed. Well, shall we swash our buckles and find the old blighter?"

“And I can't wait to visit with you again, Miss Izzy. Most of all, I cannot thank you enough for giving me the chance to be a buccaneer. You are most awesome!”
―John

John Darling is a supporting character from the Disney Junior animated series, Jake and the Never Land Pirates. He is the middle child of the Darling siblings. He enjoys stories told by his sister Wendy alongside his younger brother Michael Darling.

Even before his first visit to Never Land, John loves hearing Wendy's stories of Peter Pan and plays the character of Captain Hook while his younger brother Michael plays Peter Pan during their nursery games. One night, while their parents went out, Peter visits the Darling kids and teaches them how to fly and takes them to Never Land with them. When they arrive in Never Land, Captain Hook and his pirates shoot at them with their cannon, but Peter orders Tinker Bell to take the Darlings to the hideout while he takes on Hook.

Later after a few adventures, Wendy tells her brothers that they're going home tomorrow, but John and Michael refuse until Wendy reminds them about their mother, and the boys wish to return home. But the Darling siblings are captured by Captain Hook and his pirates who are waiting outside having revealed their hideout by Tinker Bell who was banished earlier for jealousy of Wendy and been captured by Mr. Smee. On the Jolly Roger, the Darling siblings are offered to become pirates to which John and Micheal agree, but Wendy stops them, saying that Peter Pan will save them. However, Captain Hook admits to leaving a present for Peter from Wendy that had a bomb in it that will blow shortly and take Peter with it. But unknown to Wendy, the boys, and Captain Hook, Tinker Bell manages to escape from her prison and warns Peter of the bomb, and Wendy and the boys being captured. Thinking the bomb has killed Peter Pan, Hook has Wendy walk the plank, but luckily Peter arrives and saves her and frees the boys, and they fight off Hook and his pirates. In the end, Peter takes Wendy, John, and Michael home to London.

Sometime after the events of the original film, Wendy still wanted to keep the spirit of Peter pan alive, and so she and her brothers would never forget the adventure they had, she wrote the events down in a book. John still loves hearing the tales from the book every night, longing for his next visit to the island.

John is shown to be extremely sophisticated, despite his age. He often speaks in a sophisticated way, which his younger brother Michael usually mimics and repeats (albeit in a more simplistic way). John is also shown that he is brave and clever. John is, as well, very mature, but loves his time being very adventurous and playful.

John makes his first appearance in the series in the special, "Battle for the Book", after enjoying another of Wendy's tales of their adventures in Never Land and Peter Pan iconic battle the nefarious Captain Hook before turning in for the night. Soon John and his sibling hear a scratching noise coming from the window believing it was Peter coming to take them all back to Never Land. Unfortunately for the Darling children, it was Captain Hook who was bent on destroying Wendy's storybook so he'll never hear the tale of Peter and his humiliation again. John and his siblings tried to stop the captain from escaping with the book but Hook proved too wily for the Darlings. Wendy knew of a way to contact Peter Pan using a special song. Peter assigns Tinker Bell to contact Jake and his crew, giving her his hat so he can speak to them through it to tell them what to do. When Tinker Bell finds Jake and his mateys, Peter explains the situation to them, and they set off on Bucky to head to London, being amazed by the sight of the British capital as they arrive to locate the Darling house. When they arrive, the Darling children mistake them for being with Hook, but once Jake explains they're allied with Peter Pan, they set off on Bucky to find the Jolly Roger, which has become lost in the fog surrounding London. During the search, Michael begins to show signs of forgetting about Peter Pan and Never Land. When they find Hook, the team is forced to split up from Bucky to confront Hook on the Jolly Roger. In the scuffle, Hook escapes to the streets below, and while Jake, Wendy, Izzy, and John pursue him. During the pursuit, John begins to show signs of forgetting about Never Land as well. When the balloon keeping the ship airborne is ruptured, the ship splashes down next to a dock, grabbing the attention of a late-night patrolling police officer who chases after Smee, Sharky, and Bones. By the time Jake, Wendy, and the others catch up to Hook, he's able to convince the officer that Wendy, Jake, and the kids are the bad guys, allowing him and his crew to escape back to the Jolly Roger as the fog clears so they can return to Never Land. Jake, Wendy, and the rest of the gang try to convince the officer of the truth, but it's not until he sees Tinker Bell himself does he realize he's been tricked and lets the kids go to pursue Hook, getting a kiss of thanks from Tinker Bell in the process.

By the time Bucky returns to Never Land, they've lost sight of Hook, however, remembering Hangman's Tree underground tunnel system, Wendy and her brothers takes Jake and his crew to Peter's hideout to use the secret tunnels to find Captain Hook, only to find that Hook is heading for the Valley of Fury to destroy Wendy's book in the pit of blue fire located there. Along the way, Wendy, John, and Michael begin to show signs of forgetting about Peter Pan and Never Land, but when Peter himself shows up, the Darling siblings remember and the team head to the Valley of Fury.

John reappears in the series' finale, "Captain Hook's Last Stand!", Jake and his crew accompanied by the Darling siblings prepare to greet Peter and Tinker Bell who have returned from their travels to the Lands beyond the Never Sea. Peter Show the various treasures from his travels and warns his friends of the danger of one, the Doom Stone that has the power to turn anyone into stone and gradually turn its user evil and into stone. Peter hides the Doom Stone within Hangman's Tree but Captain Hook overhears and manages to steal the Doom Stone turning Peter Pan to stone, Captain Jake and his crew get help from Wendy, John and Michael to find the magic items needed to rescue their petrified friend by hiding him within Tiki Forest.

John only appearance in the series printed media is the storybook adaption of Battle for the Book. Michael and John love hearing Wendy's stories about Never Land-especially when Peter Pan outsmarts Captain Hook! But that sneaky snook Hook hates to look like a bumbling fool, so he decides to fly to London, steal storybook, and destroy her stories once and for all. John and his siblings later accompany Jake and his crew in retrieving Wendy's storybook before they lose there memory of Peter and Never Land altogether.

John only video game appearance in the series is the Disney Junior online game "Jake's Lost Story Quest." He along with his siblings are characters the player can choose to play as. If not chosen John will still accompany the player from London all the way to Never Land. 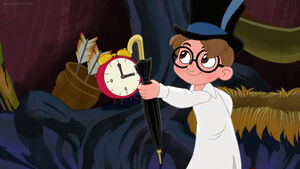 For more pictures and screenshots of John Darling, click here.