Start a Wiki
Jake's Spyglass is object featured in the Disney Junior series Jake and the Never Land Pirates,it is often used by Jake. Jake relies upon his spyglass to magnify the view on anything far away. Pirates often used a spyglass to spot land or an incoming ship in the distance.

Jake's spyglass first appeared in the series pilot Hide the Hideout!, after Skully spot the Jolly Roger sailing towards Pirate Island. Jake used his spyglass to confirm it was indeed Captain Hook's ship.After that Jake's spyglass has been seen regularly through the course of the series.

Jake's spyglass makes a brief appearance in the episode "Dancing with Pirates ",Jake explains to the viewers that pirates have a lot of tasks to do.As Jake looks through his spyglass he spots the Never Bird flying to Never Ever Peak Mountain.

Jake's spyglass reappears in the episode "Stormy Seas", while Jake and his crew are sailing through a stormy Never Sea to the next pirate piece of eight located at Trident Rock. Captain Hook and Mr. Smee are on their trail for the pirate piece as well.

In the Disney Junior book Jake and the Spyglass. After Captain Hook loses his spyglass, he decides to takes Jake's forever. Danger lurks around every corner as Jake and his crew try to get their spyglass back from Captain Hook and the wild animals of the Never Jungle.

Jake's Spyglass appears in the "Jake's Never Land Pirate School App." It can be spotted during the Map & Spyglass segment.The players learn to navigate Never Land with Cubby and then use the spyglass to find exciting treasures with Jake. 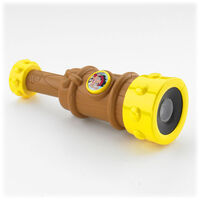 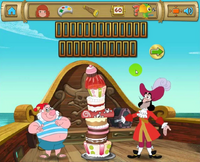 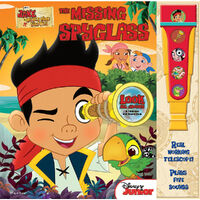 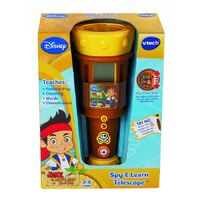 Add a photo to this gallery
Retrieved from "https://jakeandtheneverlandpirates.fandom.com/wiki/Jake%27s_Spyglass?oldid=90325"
Community content is available under CC-BY-SA unless otherwise noted.