Start a Wiki
Izzy's Puzzle Box is object featured in the Disney Junior series Jake and the Never Land Pirates. It is one of Izzy's most prized possession.

Izzy's Puzzle Box first appeared in the Izzy's Pirate Puzzle, when spots Captain Hook Izzy's puzzle box mistaking it for a tiny treasure chest, he steals and flees to his Treasure Cave hidden on Never Land with Mr. Smee. Fed up due to his various failed attempts to open the puzzle box Hook decides to smash it with a large rock. Izzy quickly went into action pouring Pixie Dust on herself so she could fly, she swooped down retrieving the box before Hook could smash it open.

Izzy's Puzzle Box makes a cameo in the episode "Pirate Putt-Putt", while Jake and his crew were in their treasure room. Izzy picks up the box.

Izzy's Puzzle Box makes a reappearance in the book, "My First Look Find Jake and the Never Land Pirates". The box is one of the many objects scattered aboard Bucky. 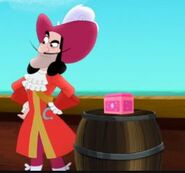 Add a photo to this gallery
Retrieved from "https://jakeandtheneverlandpirates.fandom.com/wiki/Izzy%27s_Puzzle_Box?oldid=85447"
Community content is available under CC-BY-SA unless otherwise noted.