Hook's Spyglass is recurring object featured in the Disney Junior animated series, Jake and the Never Land Pirates. Its a object used by mariners to magnify the view, kept on one's person to view anything far away. A spyglass is typically composed of a metallic or wooden cylindrical casing, which contains lenses that magnify images from distances that may be hard to see from the human eye itself. Pirates often used a spyglass to spot land or an incoming ship in the distance.

Captain Hook's spyglass makes regular appearance through the course of the series often used by Hook to spy on Jake and his friends in order to plunder there various treasure.

In the Disney Junior book Jake and the Spyglass, Captain Hook loses his spyglass, he decides to takes spyglass forever. Danger lurks around every corner as Jake and his crew try to get their spyglass back from Captain Hook and the wild animals of the Never Jungle.

Hook's spyglass makes a brief appearance in the intro of the Disney Junior online game "Puttin' Pirates". Captain Hook overhears Jake and his crew heading to the Pirate Putt-Putt Course for another game and decides he'd like to play.Hook's spyglass makes a cameo appearance as randomly object featured in background of the various levels in the online game "Jake's Pirate Marble Race Way".

Hook's spyglass appears in the online game "Hook Yer Pirate Name",as one of the the various objects scattered about the Jolly Roger that the player can choose from which will help Captain Hook determine the player pirate name. 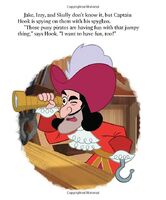 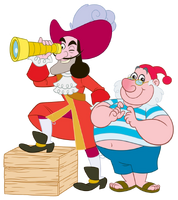 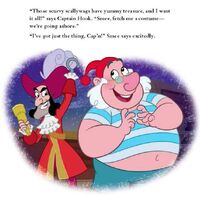 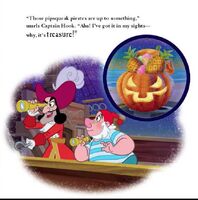 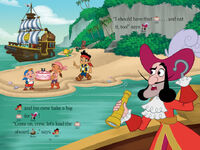 Add a photo to this gallery
Retrieved from "https://jakeandtheneverlandpirates.fandom.com/wiki/Hook%27s_Spyglass?oldid=95434"
Community content is available under CC-BY-SA unless otherwise noted.