Start a Wiki
Captain Cuddly Bear is a recurring object in the Disney Junior series Jake and the Never Land Pirates. It is Captain Hook's beloved teddy bear.

Not much is known about Captain Cuddly Bear, other then he is Captain Hook's most pride possession of his youth and even as an adult Hook relies on it to help him sleep. As revealed in the episode "Captain Hook is Missing!", Hook can't sleep without Captain Cuddly.It was also revealed that Hook was originally embarrassed to show affection to his teddy bear in front of his crew,who already knew about Captain Cuddly seen at the end of the episode. But later in the series Hook doesn't seem to care if his crew or even Jake and his crew know about how fond he is of his cuddly bear.

Captain Cuddly Bear first appeared in the episode "Captain Hook is Missing!" while Hook was in his sleep walking state the little bear didn't leave his grasp until Hook was carried off by a giant Butterfly that drop him off on Belch Mountain. Jake and his crew as well the crew of the Jolly Roger discover the bear without Hook, Jake use his spyglass to spot Hook on top Belch Mountain reacting quickly Izzy use her Pixie Dust on Jake allowing him to rescue Hook before he fell into the volcano.

Captain Cuddly Bear reappears in the episode special "Jake and the Never Land Pirates: Jake Saves Bucky". As Hook can't sleep and orders his crew to find him a story prompting the plot of the episode.Captain Cuddly is briefly featured again at Hook's side during the musical number Bucky Will Be Mine,as Hook sings how he plans to force Jake and his crew to race the against the Jolly Roger for the ownership of Bucky. Naturally, Hook decided to cheat coming up with all kind various contraptions to counter Bucky's.

Captain Cuddly Bear makes a brief cameo appearance at the end of the episode "Pirate-Sitting Pirates",Captain Hook was settling in back in his bed aboard the Jolly Roger exhausted after his ordeal on Never Land.

Captain Cuddly Bear reappears in the episode "Hook's Treasure Nap", Hook was distraught he couldn't recall were he buried Captain Cuddly Bear's toy ship,the S.S Binky his childhood toy.Mr. Smee asks Jake and his crew to help Hook locate his toy ship.Captain Hook can only remember the way to the S.S Binky when he's asleep.So as Jake and the pirates journey through Never Land lessening carefully to a sleeping Hook's directions.Soon with the help of Jake and his crew Hook uncovers his childhood toy.Smee ask his captain to thank Jake and his friends for their assistants,Hook refused to but reluctantly thanks them using Caption Cuddly Bear to speak on his behalf.

Captain Cuddly Bear reappears in the episode "Captain Scrooge."In this pirate version of the classic 'A Christmas Carol,as Captain Scrooge (played by Captain Hook) faithful companion as he is visited by ghostly Captain Treasure Tooth and taken to the past, present and future.

Captain Cuddly Bear is briefly mentioned in the episode special "The Legion of Pirate Villains!",he is mentioned by Captain Hook as one of the three things in Never Land that he couldn't risk endangering as the Grim Buccaneer attempt to open Captain Colossus's treasure and gain ultimate power.

Captain Cuddly Bear appears in the live musical stage. After Hook soon hears the ominous ticking of Tick-Tock the Crocodile approaching the Jolly Roger the captain panics about the deck of his ship as he flees to Smee to save him, his bumbling first mate accidentally knocks Hook out cold as he open the door.Unaware of his action Smee believes Hook's taking a nap, Sharky brings out a blanket and Bones brings out Captain Cuddly Bear for Hook can enjoy his nap. 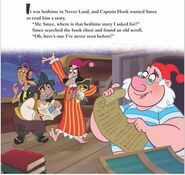 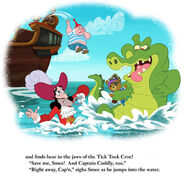 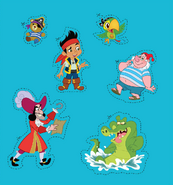 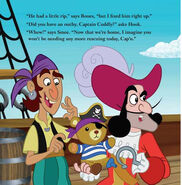 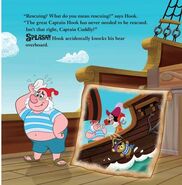 Retrieved from "https://jakeandtheneverlandpirates.fandom.com/wiki/Hook%27s_Captain_Cuddly_Bear?oldid=90981"
Community content is available under CC-BY-SA unless otherwise noted.