The Hideout is Jake and his crew secret hideaway within Pirate Island.

In the episode "Cubby's Pet Problem" while Stormy was showing the wonders of the Never Sea to Jake and his crew when they reached Cave of Neptune they befriend Slink, a baby sea serpent who quickly took a liking to the puny pirate crew, following them all the way back to Pirate Island much to their surprise. They chase after the baby sea serpent all over the island and into the hideout until they manage to capture Slink by playing his favorite game fetch.

In the episode "Pirate Genie-in-a-Bottle!"Jake and his crew discover Pip's ship-in-a-bottle on Pirate Island beach and couldn't wait to make wishes of their own. Suddenly a storm appears and the young pirate team enters the hideout. While inside the hideout Pip was very impressed with it. Later Pip attempts to make Jake and his crew's wishes come true, however, he accidentally congers up frogs as his magical powers are running out. Pip knew of a location in Never Land called the Treasure-Wishing Well in order to restore his powers.

In the episode "Hideout…It's Hook!", when the hideout is in danger of self-destructing, Jake and his crew must evacuate the hideout for good and try to flush Captain Hook out when he makes his way into it. But by the end of the episode, it was Hook's bumbling that saves the island.

The Hideout plays a larger role in the episode "Hideout Hijinks!" Jake and crew try to uncover the magical pirate piece hidden within their hideout. 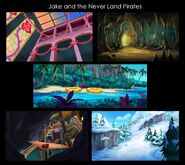 Add a photo to this gallery
Retrieved from "https://jakeandtheneverlandpirates.fandom.com/wiki/Hideout?oldid=91654"
Community content is available under CC-BY-SA unless otherwise noted.