Jake and the Never Land Pirates Wiki
Register
Don't have an account?
Sign In
in: Characters, Males, Villains,
and 5 more

"Mystery of the Mighty Colossus"

"The Legion of Pirate Villains"

To take the Mighty Colossus as his own

Getting what he wants,Besting Captain Colossus

Captain Colossus and Jake messing up his plans,

Sword,smoke bombs,crossbow
The Grim Buccaneer is a minor antagonist from the Disney Junior animated series, Jake and the Never Land Pirates. He is voiced by Christian Slater.

Many pirates who sail the Never Sea heard of the tale of the Grim Buccaneer's wicked ways. He once served as Captain Colossus as his first-mate. However, during Colossus's battle with the Strake, Grim left Captain Colossus to face the beast alone. When Captain Colossus managed to beat the beast and soon became aware of Grim's evil nature and desires to claim his battleship as his own, he was forced off the Mighty Colossus. The Grim Buccaneer soon returned to claim the Colossus as his own for revenge when he spotted its new captain, Jake. Due to his time serving Captain Colossus, Grim has a vast knowledge of the various tricks and secrets of the battleship that even Jake and his crew are unaware of.

Grim is very ambitious and self-centered. He is a villain whose primary motivation is power. His main goal is becoming the captain of the Mighty Colossus. He will step on anyone to achieve his goals including his own allies. He is calm and calculating but can lose his temper when things don't go his way. However, he is immensely intelligent, devious, cunning, and scheming. He can think on his feet, deduce correct facts from very little clues, adapt his plans to the situations at hand and devise nearly flawless schemes. Grim's only moment of hesitation is during "The Legion of Pirate Villains", where Captain Colossus confronts him, saying that he once trusted Grim like a son, leading Grim to become somewhat troubled. However, he quickly recovers, believing Captain Colossus was merely trying to trick him.

The Grim Buccaneer first appeared in the episode "Mystery of the Mighty Colossus," where he sneaks aboard the Mighty Colossus and began abducting the various members of Captain Jake’s crew from the shadows. He later reveals himself to Captain Jake, and a sword fight commences. Grim soon gets the upper hand do to his underhanded tricks and knowledge of the Mighty Colossus. Grim then locks Jake and the others down within the holding cell holding them prisoners and was plotting to abandon them all on Pirate Dread Island where they will never return. Once at the helm of the Mighty Colossus, Grim savors his victory. This is short-lived when Jake and the others manage to escape and confront Grim. Grim then attempts to flee gets captured by Jake and his crew. Jake decides to send Grim to Pirate Dread Island, as he thinks it would be the perfect place to keep him from causing trouble in the future. Grim, however, manages to break free and swears he'll return more powerful than ever and the battleship will become his, before vanishing in a cloud of smoke.

The Grim Buccaneer reappears in the episode "The Legion of Pirate Villains" He pursues Captain Colossus's pet Never Land Fire Bird, Wildfire who has been searching for Jake and his crew help Colossus. Grim summons ShiverJack, Doctor Undergear and Captain Hook (by accident) to form the Legion of Pirate Villains to help locate Colossus's legendary treasure hidden on Colossus Island. Their main objective is to find three keys, The Crystal Key, The Golden Key, and The Iron Key. The villain's pursuit Captain Jake and manage to steal the keys he and his crew have found. During this chase Grim makes a deal with Hook, promising him half of Colossus's treasure. Hook later becomes Grim's downfall, as Jake convinces Hook to help him instead, knowing that Grim was merely using Hook and had no intention of sharing Colossus's treasure with him. At the end of the special Grim, Undergear and ShiverJack are left stranded in the middle of the Never Sea on a tiny raft arguing who is the captain of the vessel after being defeated. The villainous trio's anger is soon replaced by terror as Tick-Tock the Crocodile emerges out of the Never Sea and attempts to devour them. The Villains flee with the crocodile in hot pursuit. 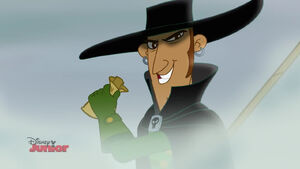 For more pictures and screenshots of Grim Buccaneer, click here.