Start a Wiki
The Golden Tiki is a tiki idol made of solid gold belonging to Tiki Trees of Tiki Forest. It has the magical power to draw gold to it.

The Golden Tiki first appeared in the episode "Tiki Maskerade Mystery", Jake and his crew were invited to the Tiki Trees's Maskerade located in Tiki Forest. Soon Captain Hook and his scurvy crew arrive at the party, Hook was overjoyed to see his beloved Red Jessica but he is soon distracted by his greed when witnessing the Golden Tiki and was tempted to take it for himself. Jake, however, witness Hook various attempt to swipe the tiki but soon discover that someone else has beaten the greedy captain to the idol. Forcing both Jake and Hook to team up to catch the thief. While all the other guests appeared to be innocent it looks like Red Jessica may be the thief, but Hook refused to believe that his beloved would do anything sneaky. It turns out Beatrice Le Beak was the true thief disguised as Red Jessica and almost made her escape with the treasure if it wasn't for the real Red Jessica disguised as a Tiki Tree stopping Le Beak from escaping. 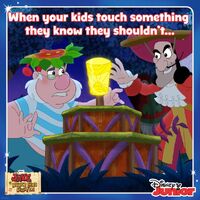 Add a photo to this gallery
Retrieved from "https://jakeandtheneverlandpirates.fandom.com/wiki/Golden_Tiki?oldid=90349"
Community content is available under CC-BY-SA unless otherwise noted.