The Fish of Gold (refereed to by Captain Hook)

Playing, performing tricks for Cubby and his mates

Captain Hook
Gilly is a minor character from the Disney Junior series Jake and the Never Land Pirates. She's Cubby's pet goldfish. Her vocal effects are provided by the late Russi Taylor.

Gilly first appeared in the episode "Cubby's Goldfish", where Cubby began to show his precious pet to Jake, Izzy and Skully. The team were not the only ones enjoying Gilly and her tricks. Captain Hook, was looking to liven up his dull aquarium,and decides to swipes Gilly away from the sea pups for his own fish tank, causing Jake and his crew to peruse the greedy captain through Never Land in order to return Gilly safety back to Pirate Island. As Hook and Mr. Smee attempt to make there escape back to the Jolly Roger by crossing a bridge to the other side ,Gilly manages to make her escape by spraying water into Hook's face, causing him drop Gilly and her bowl into into the roaring river.Jake and his crew manage to spot Gilly racing past but as the young pirate team manage to get across to the other side and rescue Gilly,she is quickly snatched up once more by Captain Hook using his plunger-hook.Hook and Smee flee with Gilly back to rowboat and make there way back to the Jolly Roger.Jake and his friend give chase once more aboard Bucky. As Hook adds Gilly to his fish tank he take great delight to his new addition to his tank but also besting Jake and his crew.But this is short live once Jake and his crew come aboard the Jolly Roger,demanding Gilly back.Hook refuses to give up his golden treasure and orders his crew to get rid of the sea pups.Jake and his crew manage to out wit Hook and his crew and attempt to escape with Gilly.But as Gilly leaps out of the fish tank,Captain Hook attempts to stop her and she land on top his hat,flopping as Hook struggles to catch her.Seeing the danger of Gilly being out water,Izzy give Gilly flight with her Pixie Dust,allowing the goldfish to fly safety back into her fish bowl in Cubby's arms.Jake and his crew rejoice that they manage to rescue Gilly and decide to head back to Pirate Island.Hook and his crew try to surround the young pirates, preventing there escape, but Izzy uses her Pixie Dust once more on her self and crew-mates, allowing Jake and his fly away back to Pirate Island.Gilly is last seen after Jake and his crew place there gold doubloons into Team Treasure Chest, preforming tricks and kissing Cubby on the cheek for rescuing her before waving goodbye to the viewers.

Gilly reappears in the episode special "Jake and the Never Land Pirates: Jake Saves Bucky", unlike her first appearance where she was in a fishbowl, Gilly was freely swimming through the Never Sea. She appeared during the hunt for the second clue of the Great Never Race between Bucky and the Jolly Roger.

Gilly makes a minor appearance in the "Jake's Never Land Pirate School App." She can be spotted during the Map & Spyglass segment while learning to navigate Never Land with Cubby and then use the spyglass to find exciting treasures with Jake. 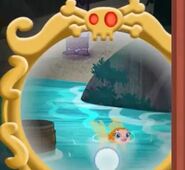 Retrieved from "https://jakeandtheneverlandpirates.fandom.com/wiki/Gilly_the_Goldfish?oldid=90954"
Community content is available under CC-BY-SA unless otherwise noted.