Tricked by Jake and his crew into fleeing back into his wooden crate with the rest of his crew.Sent to Pirate Paradise by Treasure Tooth and Peg-Leg Peg.
Ghostly Bob is a minor character featured in Jake and the Never Land Pirates. Ghostly Bob is the leader of a mischievous band of pirate ghosts who were sealed away in a wooden crate cast to the bottom of the Never Sea. He is voiced by Bill Farmer.

Not much is known about Ghostly Bob life before or how he died, other than he is a captain of a small band of pirates that enjoy haunting other pirates. He and his crew where somehow imprison within a wooden crate and sent to the bottom of the Never Sea.

Ghostly Bob is the most aggressive of the three pirate ghosts even when confronted by Jake,Captain Treasure Tooth and Peg-Leg Peg when Bob was not intimated and refused to leave Captain Hook's ship and not even Jake and his friends had the power to get rid of him and his men. Ghostly Bob's only fear ironically is scary ghosts.

Ghostly Bob and his crew reappear in the episode "Phantoms of Never-Nether Land", still causing mischief in Pirate Paradise. The trio ends up stealing Peg-Leg Peg's Spirit Key locking the gates to Pirate Paradise preventing Peg from leaving and Treasure Tooth from entering. With the help of Jake and his pirate crew Treasure Tooth was able to track down Ghostly Bob and his crew. Bob informs Jake that they took the key to free Captain Wraith from Never-Nether Land who they got a message from in a bottle. Jake and his crew warn Bob not to trust Wraith after dealing with the fiendish pirate once before and the dangers of unleashing the evil spirits of Never-Nether Land on Never Land. Bob agreed to return the key but it was too late, Pranky accidentally sets Wraith free. After Wraith is locked away once more Bob and his crew apologized for the trouble they caused and returned to Pirate Paradise with Treasure Tooth to free Peg-Leg Peg. 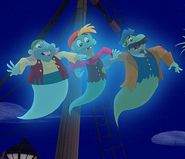 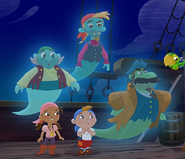 Retrieved from "https://jakeandtheneverlandpirates.fandom.com/wiki/Ghostly_Bob?oldid=90424"
Community content is available under CC-BY-SA unless otherwise noted.