“ Well, fizzy, bubbly water always makes me burp. And I know just where to get some. Geyser Gulch. ”
― Izzy

Geyser Gulch is a location on Never Land. A lot of visitors enjoy the fizzy bubbly water that erupts from the geysers.

Geyser Gulch first appeared in the episode "Rock the Croc!", Jake and his crew receive a map and message in a bottle from Peter Pan showing them the way to Pirate's Plunge where they can cool off. Captain Hook overhears the young pirates on the search for Pirate's Plunge and he tries to take it from Jake. during the struggle for the bottle it is cast into the air, landing in the open jaws of Tick-Tock the Crocodile, and it is swallowed. Jake and his crew soon come up with the idea to get the crocodile to burp up the map,Izzy knew the perfect place to lure Tick-Tock to Geyser Gulch to drink the fizzy bubbly water to make him burp up the map. The crocodile successfully drunk the water and belch but the map didn't come out. Captain Hook returns to retrieve the map once more by patting the croc back like infant much to the annoyance of the crocodile who send the captain flying out of the gulch.

Geyser Gulch reappears in the storybook X Marks the Croc based on the episode Rock the Croc.Like the episode Izzy suggest that they lure Tick-Tock Croc to Geyser Gulch in hopes that he'll burp up the map to Pirate's Plunge.Once at the gulch the crocodile drinks from the geysers unfortunately he doesn't burp up the map. 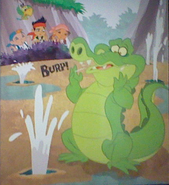 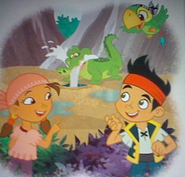 Add a photo to this gallery
Retrieved from "https://jakeandtheneverlandpirates.fandom.com/wiki/Geyser_Gulch?oldid=91047"
Community content is available under CC-BY-SA unless otherwise noted.