“ That shape. It's my sword! This is the tree where Peter Pan got the wood to make it for me! ”
― Jake

Sometime before the events in the series, Peter Pan carved the Forever Sword using the wood from the Forever Tree. He bestowed the sword on to Jake so the young pirate could be a good leader while Peter explored the world outside of Never Land.

The Forever Tree first appeared in the episode "The Sword and the Stone". While searching for treasure Captain Hook and Mr. Smee stumble upon a mysterious stone door that can only be opened by a sword. So, Hook steals Jake's wooden sword with Jake and his crew in pursuit. After a along chase through the Never Land Jungle Jake and his crew find Hook and Smee still struggling to open the stone door. Izzy discovers a message from Peter regarding the stone door revealing only a great leader can open the door with enchanted sword and nothing more. Sending Captain Hook into a rage if he couldn't see what lies behind door he wouldn't allow the others to. As he attempts to destroy Jake's wooden sword, the captain loses his footing and stumbles into Mr. Smee, landing on a tiny palm tree that flings the duo deeper into the Never Land Jungle. With the threat of Hook no more Jake and his crew decide see what was inside as they slide down underground tunnel were they discover the massive Forever Tree.

The Forever Tree plays a larger role in the special "Jake's Never Land Rescue". It was revealed by the fairies of Never Land that the Forever Tree is the source of Never Land's magic. Jake and his crew must journey to Mount Destiny before all the magic of Never Land disappears and the ancient Forever Tree fades away.Meanwhile, the rest of Jake's crew has finally gotten rid of Captain Hook, just in time for the small flying light to find them and lead them to Jake and the guardian, who need their help to make a new Forever Tree grow. They scream, "Yo Ho, Forever Tree Grow!" continuously, and a new Forever Tree grows, the magic is restored, everything reappears, and Never Land is saved! The guardian reveals himself to be Peter Pan, and the small flying light is revealed to be Tinker Bell. Peter Pan gives Jake the power to fly without pixie dust and invites Jake to explore the worlds beyond Never Sea.

The Forever Tree is briefly mentioned by Cubby in the episode "Captain Hook's Last Stand!" as Captain Jake and his crew get help from Darling siblings to find the magic items needed to rescue Peter Pan and break the petrified powers of the Doom Stone. 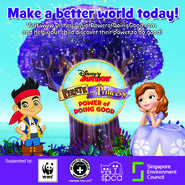 Add a photo to this gallery
Retrieved from "https://jakeandtheneverlandpirates.fandom.com/wiki/Forever_Tree?oldid=92491"
Community content is available under CC-BY-SA unless otherwise noted.