“I'm finally going to meet the famous First Mate, Mollie, at Red Jessica's Pirate Convention. They say she's the best First Mate there ever was. Why, she's the one who inspired me to become a First Mate.”
―Mr. Smee.

First-Mate Mollie is a character from the Disney Junior series Jake and the Never Land Pirates. She is a swashbuckling pirate who serves Red Jessica as her first mate on Crimson Isle.Mr. Smee has a massive crush on her. She is voiced by Melissa Rauch.

Not much is known about Mollie's past before arriving in Never Land, what is known as revealed by Red Jessica, Mollie is every pirate captain ideal first mate. As Smee revealed she inspired him into becoming a first mate himself.

Mollie makes her first appearance in the episode Smee-erella!, assisting Red Jessica with her pirate convention. Captain Hook, Sharky and Bones were the first to arrive at the con Hook was thrilled to be in the company of his beloved Red Jessica who introduce Hook to Mollie, who already knew of the captain nefarious reputation. Smee soon arrives after being transformed into the dashing, swashbuckling "Buck Buccaneer" by Pip the Pirate Genie. Mr. Smee finally gets the chance to meet Mollie who wasn't the only one fascinated by Buck Buccaneer Red Jessica was also fascinated with new pirate much to the jealousy of Captain Hook.

During the first event of the Pirate Convention festivities Rosie played the damsel in distress. Sharky and Bones were the first contested to try to rescue the adorable kitten but the two musical pirates failed much to the amusement to Rosie giving off a giggle. Mollie encouraged Mr. Smee to try and rescues the kitten which he agrees. Unknown to Smee Captain Hook armed with his grappling hook- Hook was determined to make Buck look foolish in front of Red Jessica.Jake and his crew alert Smee of Hook's plot and Smee successful rescues Rosie winning the first event at the pirate convention.

Later during the pirate waltz, Mollie wanted to dance with Smee but he was dancing with Red Jessica. Captain Hook offers to dance with Mollie much to her confusion. Mollie was right to worry Captain Hook was using Mollie to get on the dance floor so he could make Buck Buccaneer look foolish in front of Red Jessica. But Jake warns Smee yet again thwarting Hook's plot. Mollie learns that Buck Buccaneer whom she has spent the pirate convention with has disappeared and has left behind a golden boot, With the help of Red Jessica go on a non-stop search Jake and his crew suggest they should search the Jolly Roger. After hours, Mollie finally finds her Buck Buccaneer, Mr. Smee. Mollie is last seen with Red Jessica being offered to be her first mate which she accepts and sailing back to Crimson Isle. 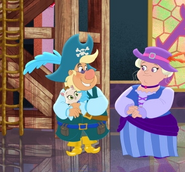 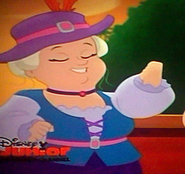 Retrieved from "https://jakeandtheneverlandpirates.fandom.com/wiki/First-Mate_Mollie?oldid=90589"
Community content is available under CC-BY-SA unless otherwise noted.