"Attack Of The Pirate Piranhas"

To keep the electric storm eels from escaping their prison

"I can tell. The name's Finn!"
"You're welcome. What's wrong? Catfish got your tongue?"
"Flying fishsticks! I'm never gonna get that big eel back in this cave!"
"Ha-ha! It's just you and me, Sparky!"
"Quivering kelp! I need my trident to lock up the Storm Eel, or this Never Storm will never go away!"
"Thanks to you new mateys, its gentle waves and smooth seas for me."
"But I'm in a splash of trouble right now."
"So I gotta ride the tide. Later!"

Finn the Mer-Boy is a supporting character from the Disney Junior animated series, Jake and the Never Land Pirates. He is voiced by Tyrel Jackson Williams.

Finn is a young merboy appointed to keep the electric storm eels from escaping their prison into the open Never Sea, but one day, he accidentally released one with the power of his trident.

Finn is a young merboy with a dark complexion, curly dark brown hair, brown eyes and freckles. As a mer-folk, he has a green scaly fish-like tail with dark spots.

Finn first appeared in the episode "Mer-Matey Ahoy!", when he introduced himself to Jake's crew. It is his duty to keep the Storm Eels lock away in special cave beneath the Never Sea, but one of the eels manage to escape his watch when his trident set it to lose. Jake and his crew offer to assist Finn to return the Electric Storm Eel back to its cave. But the Electric Storm Eel proved to be quite slippery even with Jake's and his crew assistance accidentally getting Bucky entangled in a large bed of seaweed. Meanwhile Captain Hook manage to steal Finn trident to unlock a hidden treasure deep beneath the Never Sea. But this is short-lived as the massive Electric Storm Eel collides with Hook's sub causing it to sink forcing the captain and crew to abandon it leaving Hook and his crew at drift in the middle of the Never Sea only for Jake and his crew accompanied by Finn to rescue them and reclaim the trident. Electric Storm Eel soon reappeared to mock Finn for failed attempts to catch him, Jake soon notice the Storm Eel playful nature and devised a plan with Finn's assistants to have it chase them back to the Eel's cave. With Electric Storm Eel trap behind its cave Finn thanks his new pirate friends before heading off the check on the other Storm Eels caves.

Finn reappears in the episode "Look Out...Never-Sharks!". Finn takes Jake on an underwater excursion to go Wreck Racing at Buster Boat Bay with his friend Smiley the Never Shark. While at the bay they come across three Never sharks who challenge Smiley to a Wreck Race through the bay. Unknown to Jake and Finn Captain Hook has entered the bay in hopes of finding pearls hidden within the bay. 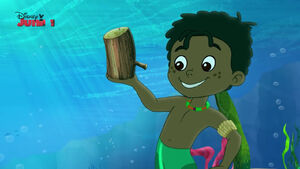 For more pictures and screenshots of Finn the Mer-Boy, click here.

Retrieved from "https://jakeandtheneverlandpirates.fandom.com/wiki/Finn_the_Mer-Boy?oldid=96384"
Community content is available under CC-BY-SA unless otherwise noted.