Jake and the Never Land Pirates Wiki
Register
Don't have an account?
Sign In
in: Characters, Males, Birds,
and 8 more

Fast Claw is a recurring character from the Disney Junior animated series, Jake and the Never Land Pirates. He is Beatrice Le Beak's pet falcon and partner in crime. His vocal effects are provided by Dee Bradley Baker.

Fast Claw is Beatrice Le Beak pet falcon and sidekick. He appears to be similar to his master: sneaky, cunning and vicious. He latches onto his prey or whatever he needs to carry with his steely talons (as he did with Captain Hook's hat in his debut). Fast Claw is completely and genuinely loyal to Beatrice and, unlike other villain henchmen in the series, he is competent and easily succeeds in his task that his master gives him.

Fast Claw makes his first physical appearance in the series in the episode "Jake and Sneaky Le Beak!" He swoops down and swipes Captain Hook's quickly recognized by Mr. Smee as Beatrice Le Beak's pet. Fast Claw is later seen perch at Beatrice side when she takes command of the Jolly Roger and helps keep Hook and his crew at bay who have teamed up with Jake and his crew. When Beatrice Le Beak reaches Rainbow Falls, she leaves Fast Claw to guard the Jolly Roger, preventing Hook from getting aboard while she scales up the side of Rainbow Falls to retrieve the Splendor Gem behind the falls.

Skully came up with the idea to distract the fiendish falcon with a box of crackers allowing Hook and his crew to take command of the Jolly Roger once more. Fast Claw is last seen at the end of the episode held captive with mistress Le Beak forced to walk the plank but they later escape.

Fast Claw returns with Beatrice Le Beak in the episode "Pirate Pals!" aiding Le Beak in her hostile take over of Red Jessica's home on Crimson Isle but was tricked by Skully and Rosie into leaving his post allowing Jake and Hook crew to reclaim Crimson Isle for Red Jessica. Forcing Beatrice and Fast Claw to make their escape.

Fast Claw reappears with Beatrice Le Beak in the episode "Mystery of the Missing Treasure!", Jake and his crew discover someone has stolen the Team Treasure Chest and found a various clue from the culprit but couldn't determine who it could be. It wasn't until they found brown feathers and thanks to the Sing-Songbird identifying the feather belongs to Fast Claw. Allowing Jake and his crew to join forces with Captain Hook and Smee to set a trap for Beatrice Le Beak to regain the Team Treasure Chest.

Fast Claw returned with Beatrice Le Beak in the episode "The Sneaky Snook-Off ", during the final challenge in the Sneaky Snook-Off took place in Crocodile Cavern the lair of Tick-Tock the Crocodile and the challenge is won by the snook who strikes the gargoyle gong first. Beatrice Le Beak was assured she'd win due to Hook's fear of the crocodile. But Captain Hook cut the rope bridge leaving Le Beak to distract the hungry croc. Hook attempts to ring the gong from afar but Fast Claw intervenes forcing Hook to enter the water as well to ring the gong.

Fast Claw reappears with Beatrice Le Beak in the episode "Flight of the Feathers",Wise Old Parrot sends Top Bird and the Fearsome Four to find the treasure of the Never Land Nest. But during their quest to retrieve the treasure the Feather Four are attacked by Beatrice Le Beak's pet falcon Fast Claw who steals the Platinum Feather which is said to guide them to the treasure and injuring the team leader in the process. Luckily Top Bird land on Pirate Island where he meets Skully and the rest of Jake's crew who he entrusts to lead his team to reclaim the treasure from Le Beak. Fast Claw and Beatrice Le Beak both at the end of the episode stealing both the doubloon Captain Hook and Mr. Smee found and the Jolly Roger.

Fast Claw reappears with Beatrice Le Beak in the episode special "The Great Never Sea Conquest", Jake forms a team of the greatest captains of the Never Sea to battle the powerful Lord Fathom and the terrifying Strake. Beatrice agreed to join forces to defeat their common enemies.

Fast Claw only appearance in printed media is the storybook based upon the episode The Great Never Sea Conquest. 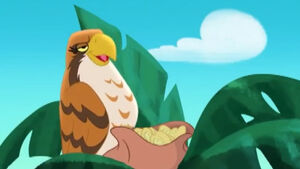 For more pictures and screenshots of Fast Claw, click here.