To drain Pip of all his magic.
To become a pirate Pharaoh. To cover all of Never Land in sand and make it all his personal desert.

Power, Consuming the magic of other genies

Those who will stand in his way for power, feeling powerless

Imprisoned in his own bottle for all eternity deep within the Never Land Desert.

Yes, I did. I do lots of things to get what I want.
And what I want is to recharge my magic.
You will do nicely, Pip the Pirate Genie.
My genie magic is growing!
My bottle!
But I still don't have enough genie-power.
I need the rest of that Pip's magic!
Curse you, Pip!
And that Jake and his pack of pirates who dare to keep you from me!
I would give a king's ransom to capture that runaway genie!
I rarely need the help of others.
But time and my power are running out.
Sign this contract, and once I have the genie Pip, you will have your payment of treasure!
Hook, you go distract those pirates and I shall sniff out their genie friend! Do not fail me.
Ah, you've finally come to your senses, Pip.
Very well! It's been a pleasure doing evil with you!
Give it up! - That's my magic inside!
No! Now I am the Taker of Magic, whom you should fear!
By the wicked winds of marlagoth! I shall return!

Dread the Evil Genie is a minor antagonist from the Disney Junior series Jake and the Never Land Pirates. He is a wicked genie who drains other genies of all their magic power so that he can boost his own. He is voiced by David Tennant.

“Do not interfere with me, mortals! I hate interference! ”
―Dread

Dread is an evil, power-hungry genie. He is the devourer of countless other genies magic, and quite feared by other genies as revealed by Pip the Pirate Genie. He is quite open and accepting about his own cruelty, and prides himself on his ruthlessness.

“He steals other genies' magic to use for himself!”
―Pip the Pirate Genie

Because Dread consumes magic from other genies, he possesses unimaginable magical power, dwarfing even that of Pip the Pirate Genie. He displays the power to detect other genies by their magical energy, and absorbing their magic by using his magic bottle. Dread's only known weakness is being without his magic bottle his power begins to fade, leaving him weak.

By the time of Dread's reappearance in the episode "Dread the Pharaoh!", after being freed from his damaged bottle Dread has lost all of his magical powers and now longs to gain magic once more.

Dread makes his first appearance in the episode of the same name. While Jake and his crew walking through Shipwreck Beach, Dread reveals himself to the young pirates. At first glance, he believed them to be genies as he could sense the magic of another genie somewhere on the island. Jake and his friends inform the new visitor they are not genies but do know one by the name of Pip. Dread uses this to his advantage, claiming he is a dear old friend of Pip and has been searching all over Never Land for him. Jake and his crew soon summon Pip to reunite the two. Frightened by Dread's arrival, Pip explains that Dread isn't a friend but a power-hungry fiend that consumes other genies magic leaving nothing left. Suddenly Dread attempts to drain Pip of his magical powers, but thanks to Jake and his crew they manage to escape with Dread in pursuit. Dread later resurfaces during Captain Hook and his crew treasure hunt much to the surprise of Hook and his bumbling crew, who overhear Dread claim he give a king's ransom to get his hands on Pip's power, Captain Hook soon reveals himself to Dread offering to join forces, Hook will capture Jake and his puny pirates allowing Dread the chance to absorb Pip's magic if he rewards the greedy captain with riches. Dread hate to admit it but he agreed to Hook's terms. Jake and his crew briefly hide within Stinkpot Swamp in order to evade Dread's detection.

After Hook successfully confines Jake and his crew within a net Hook demand the Dread keep his word about the treasure which Dread reluctantly rewards Hook with an island of treasure, allowing Dread the chance to drain Pip of his powers, he then boasted about his new powers and abilities he'll possess when he finishes with Pip. Using his last bit of magic Pip attempts to fly away but in the process, he summons a large swarm of flies that swarm over Dread. Seeing his chance Pip attempt to retrieve the bottle both genies battle over but Pip soon gets the upper hand and gain his magic back as forces Dread back into his bottle. Pip then flung the bottle to the Never Land Desert hoping no one will ever see Dread again. Unknown to the hero's Dread swears he will be free once more as his bottle begins to crack as he released an ominous cackle.

Dread reappears in the episode "Dread the Pharaoh!",Otaa wander into Dread's bottle while amusing himself in the desert. After releasing the ex-genie from his bottle Otaa wanted to make various wishes to please his the Pirate Pharaoh. Dread regretfully informs Otaa, he is now powerless and the mummy cat loses interest and returns to the Pirate Pharaoh. After overhearing that Otaa master the Pirate Pharaoh has a means of magic, that Dread can use to restore his power. Dread allies himself with Skorpio the scorpion and was able to steal the Pharaoh's crook and flail giving him the power he long for once more. Dread crowned himself ruler of the desert and soon set his eye on turning all of Never Land into his desert domain. However, this is short-lived as the Pirate Pharaoh and Jake and his crew assist in stopping Dread plan leaving him powerless once more before banishing him and Skorpio from the desert. As Dread ponders his next occupation being powerless again he comes across a hook-like stick next to the Never Nile, he picks it up claiming maybe he should be a nefarious pirate leading a crew to plunder the Never Sea (mirroring Captain Hook). Dread soon regrets making light at Hook when Tick-Tock the Crocodile emerges from the Never Nile and attempts to eat Dread. Dread screams for Skorpio to save him but the little scorpion soon wander off leaving the ex-genie Dread fleeing in terror from the hungry the crocodile. 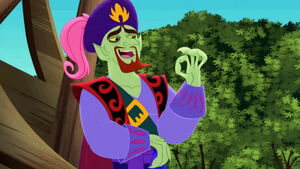 For more pictures and screenshots of Dread the Evil Genie (character), click here.

Retrieved from "https://jakeandtheneverlandpirates.fandom.com/wiki/Dread_the_Evil_Genie_(character)?oldid=90320"
Community content is available under CC-BY-SA unless otherwise noted.