"The Island of Doctor Undergear"

Mad Scientist
Member of the Legion of Pirate Villains (temporarily)

To take over the whole Never World with his robotic forces

Inventing, science, being in control, getting what he wants,world domination

Being foiled by Jake and his crew, his plans failing, being laughed at, not getting what he wants

Shark Sword, Crab Tank, numerous robotic underlings and clockwork devices, wrench
Doctor Undergear is a recurring antagonist featured in the Disney Junior animated series, Jake and the Never Land Pirates. He is a scurvy pirate mad scientist described himself as the "Greatest genius in the Never World", developing various complex mechanical devices, commonly based on sea animals, with the long-term goal of taking over the Never World. He is voiced by Tony Hale.

Doctor Undergear resides on a island of gears that he spends his days working alongside his various mechanical minions with the desires of conquering the whole Never World. It was later revealed that Doctor Undergear created Captain Gizmo in hopes of leading his robotic forces but during his preparations Gizmo's part were washed away from Undergear's island and ended up on Pirate Island leading to the episode Captain Gizmo. It was also revealed that during his preparation for Gizmo he added the wrong gear to power him, up as the golden gear gave Gizmo a heart of gold and kindness. But later during Doctor Undergear's debut, it was revealed that he didn't care for the softhearted incarnation and tried to replace it with a purple gear that made Gizmo both loyal only to him and evil.

Doctor Undergear is a short-tempered, egomaniacal, raucous and pompous evil mastermind genius. He has all the qualities of a classic mad scientist: he looks, talks, and dresses like a bad guy and possesses the psychotic sense of self-entitlement that urges him to conquer the world, the destruction of his enemies or both. A would-be tyrant, he has a hunger for power and desires as well attention, adulation and a little respect.

Doctor Undergear is a brilliant scientist, mechanic, and inventor whose mastery of technology is nearly boundless, able to create all manners of machines, mechs, and robots. His remarkable skills as an engineer and programmer are best evidenced by the armies of robots and weapons he has created for his numerous attempts at world domination.

Another of Undergear's skills is his masterminded plots, manipulations and schemes which nearly always succeed in some way. However, even when successful, his plans usually fail due to Jake and his crew and his own arrogant overconfidence.

Doctor Undergear reappears in the episode "Shark Attack!". He and two of his mechanical minions, a Crab Bot and the Shark Ship were searching for scrap metal and other parts from the various shipwrecks at the bottom of the Never Sea to make more robots when he spots Jake and his crew sailing the Mighty Colossus. Undergear marveled at the very size of the battleship and decide to take the ship for himself and use its various parts to create more robotic minions. But he is later foiled by Jake and his crew using his own Shark Sword against him forcing the mad doctor to flee once more. Undergear is last seen returning back to his lair on Gear Island when his balloon gives way sending the doctor plummeting into the Never Sea where he is chased back to shore by two Never-Sharks.

Doctor Undergear reappears in the episode "The Legion of Pirate Villains" He is hard at work on one of his latest inventions within his lair when he is captured by the Grim Buccaneer. When Undergear awakens he is seen in a holding cell alongside Captain Hook and ShiverJack as the villains begin to taunt one another the Grim Buccaneer reveals that he wishes to join forces with them, creating the Legion of Pirate Villains to uncover Captain Colossus's treasure of ultimate power before Jake and his crew finds it. Undergear agrees to join forces with them but this is merely a ploy to gain access to the treasure and later plots to betray the others. At the end of the special Undergear, Grim and ShiverJack are left stranded in the middle of the Never Sea on a tiny raft being chased by Tick-Tock the Crocodile after there defeat by Captain Jake and Captain Colossus.

Doctor Undergear reappears in the episode "Crabageddon!" He soon finds his space on Gear Island isn't enough for him and his mechanical minions and soon set his eyes on King Crab Island as his new lair. He soon attempts to capture the Crab Pirates and King Crab's son Crab Louie. King Crab soon recruits the aid of Jake and his crew to put a stop to the mad doctor's wicked scheme.

Doctor Undergear makes a cameo appearance in the series finale "Captain Hook's Last Stand!" during the closing musical number as Peter Pan and Jake soar past Gear Island where they briefly confronted by Doctor Undergear swinging his wrench about in attack like stance. He is quickly thwarted by Peter when he removes his helmet revealing Undergear's crazy unkempt hair much to Peter and Jake's amusement. 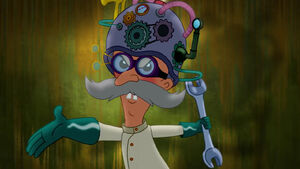 For more pictures and screenshots of Doctor Undergear, click here.

Retrieved from "https://jakeandtheneverlandpirates.fandom.com/wiki/Doctor_Undergear?oldid=94716"
Community content is available under CC-BY-SA unless otherwise noted.