Jake and the Never Land Pirates Wiki
Register
Don't have an account?
Sign In
Advertisement
in: Objects, Maps, Gifts from Peter Pan

Cubby's Map is a map of the island of Never Land that belongs to Cubby featured in the Disney Junior animated series, Jake and the Never Land Pirates. It was given to Cubby by Peter Pan before he left to explore the outside world.

Cubby's Map is featured in every adventure in the series, assisting Jake and his crew to explore the various wonders of Never Land and keeping them one step ahead of the nefarious Captain Hook. It is also revealed that Cubby is not limited to one map, as Pirate Island has a Map Room where Cubby keeps his trove of maps of Never Land.

Cubby's Map plays a larger role in the episode "Cubby's Mixed Up Map". Cubby's map is stolen by Captain Hook, who plots on using it to beat the young pirate team to the Golden Dinghy, but the Captain had trouble reading it and it is stolen from Hook thanks to sea pup's Monkey friend, who returns back to Cubby.

Cubby's Map is featured in the Lego Duplo spin-off. In the episode "Hideout Hijinks!", Cubby reveals to Jake and the rest of the crew that one of the magical Pirate Pieces of Eight is hidden within Pirate Island. Unknown to Jake and his crew at the time, Captain Hook manages to stumble inside the hideout in order to claim the Pirate Piece for himself.

Cubby's Map makes regular appearances in various books, comics, and other printed stories in the series. Cubby's map plays a major role in the storybook adaptation of Cubby’s Mixed-Up Map.

Cubby's Map has appeared in various games and apps in the series. In the Jake's Never Land Pirate School App "Map & Spyglass" segment, players learn to navigate Never Land with Cubby and use the spyglass to find exciting treasures with Jake.

Cubby's Map can be spotted in the live musical show during the Jake and the Never Land Pirates segment. In the show, Captain Hook and Mr. Smee steal the team treasure chest and Cubby joins the rest of the crew to take it back.

Cubby's Map appears in the live musical show during the Jake and the Never Land Pirates segment. Jake and his crew are on the search for a treasure hidden inside a mysterious volcano on Never Land, but during the young pirates' travels, Captain Hook steals Cubby's Map and flees to the Jolly Roger. When the young pirates journey to Hook's ship to get the map back, Jake is later caught in Hook's trap and is locked away in the Jolly Roger's crow nest. Later that evening, Cubby, Izzy and Skully sneak abroad the Jolly Roger to rescue Jake. With the assistance of Tinker Bell and Peter Pan, Jake is freed and Cubby's Map is returned. 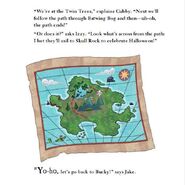 Cubby's map under the effects of the Pirate Pool of Youth.