Singing,Serving there king,keeping the Golden Claw safe from Captain Hook

Becomes friends with Jake and his crews, prevent Captain Hook form stealing The Golden Claw with the help of Cubby and the rest of crew.
The Crab Pirates are minor characters from Disney Junior's television series Jake and the Never Land Pirates. They are the loyal subjects of King Crab and the main inhabitants of King Crab Island.

The Crabs are fun loving care free spirited subjects serving under the rule of King Crab.It is currently unknown how long or how they learned of the heroic action of Jake but the crabs desperately needed his help protecting their precious treasure, the Golden Claw from Captain Hook who has been searching King Crab Island in hopes of capture the Golden Claw for himself.

The crabs first appeared in the episode "Cubby's Crabby Crusade", Cubby stays behind while the rest of the crew gather some food on Never Land,Cubby notice Jake left his sword and began pretending he was Jake unaware a group of pirate crab witness his actions mistaking him for the real Jake soon Cubby nods off and takes a nap in the dingy. While Cubby slept the pirate crabs take him to King Crab Island to meet King Crab. King Crab introduces himself to Cubby believing he was Jake the young pirate hero he heard about. Cubby’s protests, but King Crab doesn’t believe that he’s not Jake and asks for help to stop Captain Hook from stealing their most precious treasure, The Golden Claw.

King Crab and his crab subjects reappear in the episode "Crabageddon! " King Crab was enjoying playing on the beach with his son,Crab Louie when Doctor Undergear and his minions attack King Crab Island to make the island his own. It wasn't until King Crab became aware of the mad doctor's wishes he recruits the help of Jake and his crew to save his son, subjects and home. 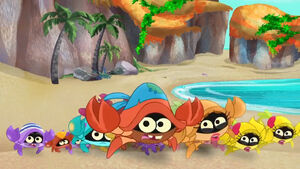 For more pictures and screenshots of Crab Pirates, click here.

Retrieved from "https://jakeandtheneverlandpirates.fandom.com/wiki/Crab_Pirates?oldid=84313"
Community content is available under CC-BY-SA unless otherwise noted.