The Coral Tunnel is a cave hidden deep within the bowels of the depths of the Never Sea said to be the hideaway of the legendary Sea-Unicorns vast golden treasure.

The Coral Tunnel first appeared in the episode "Izzy and the Sea-Unicorn", Captain Hook captures Cornica Izzy's Sea-Unicorn companion in order to locate the legendary Sea-Unicorny treasure hidden in Coral Tunnel. When Hook attempt to force Cornica to lead him to the treasure, she quickly bucks the captain off her back. Not letting the beast standing in his way for treasure Hook ties Cornica up on top the Squidailus and threatens to take away Cornica's friendship necklace Izzy gave her if she doesn't lead him to the treasure. Fortunately Jake and his crew accompanied by Stormy quickly follow Hook and his crew beneath the wave in their mini-subs. Once Hook reaches Coral Tunnel he causes a cave-in that blocks the path. Jake and his friends manage to bypass the cave in to pursue Hook and his crew following the glow of Izzy's shell. Just in time to prevent Hook and his crew from escaping with the treasure which was almost their undoing causing one of the large golden statues to collapses only for Izzy to rescue Hook and his crew with her pixie dust.Mr. Smee, Sharky and Bones thank Izzy for rescuing them. Izzy asks Hook for the necklace which Hook quickly part with no longer needing it when he could swipe the rest of the sea unicorn treasure. Cornica informs Izzy to use the golden shell to call for help from Cornica's larger Sea-Unicorns comrades who send Hook and his crew fleeing back to the Squidailus and out of Coral Tunnel empty-handed. 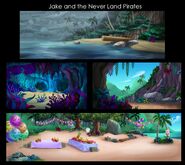 Add a photo to this gallery
Retrieved from "https://jakeandtheneverlandpirates.fandom.com/wiki/Coral_Tunnel?oldid=88963"
Community content is available under CC-BY-SA unless otherwise noted.