Cooking with a Snook is a short song featured in the Disney Junior series Jake and the Never Land Pirates. The song is sung by Sharky and Bones in the episode "The Never Land Coconut Cook-Off".

Take a recipe from a magic book
One part sneaky and two parts snook
Mix it, roll it Don't delay
Coconut codfish souffle
That sneaky snook has gone gourmet
And now he's cooking up some magic troubles on the way
Watch out, matey You don't dare look
When you're cooking with a sneaky snook 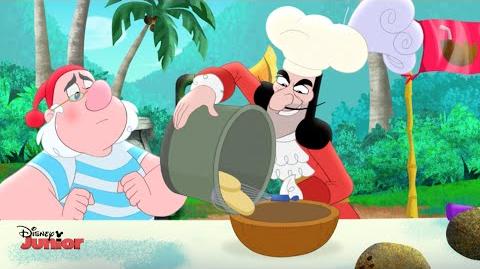 Retrieved from "https://jakeandtheneverlandpirates.fandom.com/wiki/Cooking_with_a_Snook?oldid=73535"
Community content is available under CC-BY-SA unless otherwise noted.