Control his abilities for the safety of his friends and others

Becomes friends with Jake and his crew and helps put a stop to his uncle's wicked plans to destroy them.

"Cold Snap!"
"Frostbite"
ChillyZack is a young ice sorcerer from the Disney Junior series Jake and the Never Land Pirates. He is the nephew of the evil pirate sorcerer ShiverJack. He was voiced by the late Cameron Boyce.

Not much is currently known about ChillyZack origin's or where he resided before coming into the care of ShiverJack. Before learning of his uncle's wicked ways, ChillyZack idolized his uncle's powers and wanted him to teach him.

ChillyZack is an adventurous young boy who lived on FrozenGuard with his uncle ShiverJack. He enjoys adventure and excitement and learning how to control his powers.

ChillyZack originally wasn't very skilled at controlling his ice and snow powers and thrived to master it just like his uncle. But as ChillyZack tried to get advice from his uncle to control his powers, ShiverJack merely mocked ChillyZack believing he didn't have what it takes to be an ice wizard and went back to plotting his revenge on Jake and his crew. Later during the event of his debut, ChillyZack learned he can unleash energy bolts of ice, and he can easily freeze things over/solid with a mere wave of his staff when he turns the tide of the battle against his uncle. Like ShiverJack, ChillyZack channeled his Winter Magic through his staff, mistaking it to be the source of his power, when really it was just a conduit. ChillyZack can conjure ice, snow, and frost from his mere presence, as well as freezing winds, snowballs, snowflakes, etc. 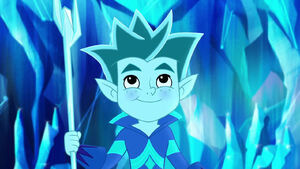 For more pictures and screenshots of ChillyZack, click here.

Retrieved from "https://jakeandtheneverlandpirates.fandom.com/wiki/ChillyZack?oldid=91709"
Community content is available under CC-BY-SA unless otherwise noted.