Violence, striking fear into his enemies, power and authority,his honor

Admits defeat to Tiger Sharky and is banish from returning to Never Land.
Chaos Khan is a minor antagonist from the Disney Junior series Jake and the Never Land Pirates. He is voiced by Kevin Michael Richardson.

Chaos Khan is supremely confident in both his strength and superiority, sometimes allowing his enemies the advantage in order to prove his might. Despite his brutish and hot-headed nature Khan is shown that he takes his code as a warrior very seriously as when he is defeated by Tiger Sharky and told to honor the warrior code. Khan couldn't refuse as he is bound to follow the warrior code of the victor. 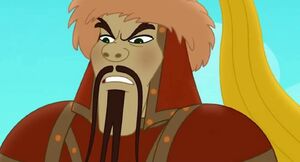 For more pictures and screenshots of Chaos Khan, click here.

Retrieved from "https://jakeandtheneverlandpirates.fandom.com/wiki/Chaos_Khan?oldid=90669"
Community content is available under CC-BY-SA unless otherwise noted.