Jake and the Never Land Pirates Wiki
Register
Don't have an account?
Sign In
in: Characters, Males, Adults,
and 7 more

Pirate/ghost
Captain of The Sea Ghoul

To leave Ghost Island using the greed of pirates who adventure to the island looking for treasure.

Transforming his victims into ghost,haunting others,plundering the riches of Never Land

Sucked into Never-Nether Land
Captain Wraith is a minor antagonist from the Disney Junior animated series, Jake and the Never Land Pirates. He is voiced by Blair Underwood.

Captain Wraith was an evil and greedy pirate that all that sail the Never Sea knew and feared for his wicked ways. As the scourge of the Never Seas, his ruthless and malicious knew no limits even when he passed by unknown means, his restless evil spirit ended up on Ghost Island which only appears at night on Never Land. The only danger for Captain Wraith is the vortex leading to Never-Nether Land which looms over the island, Never-Nether Land is said to be the final resting place for evil spirits. But Captain Wraith proved too clever to go near the vortex. Captain Wraith soon plotted to leave Ghost Island using the greed of pirates who adventure to the island looking for treasure. Using his enchanted ghostly treasure, Wraith plots to turn any and all pirates to come in contact into a ghost to serve him in plundering the whole Never World.

As a ghost Captain Wraith displays the powers of flight, phase through walls, disappearing and reappearing, and shape-shifting. Captain Wraith most noteworthy abilities was the power turn anyone who comes into contact with his ghostly treasure into a ghost. But the treasure would later prove to be Wraith's downfall.

Captain Wraith first appeared in the episode Escape from Ghost Island, after discovering the ghostly treasure of Ghost Island turned Captain Hook, Mr. Smee and Jake into ghosts. As a part of Wraith's plot to have a ghostly crew of his own to pillages the inhabitants of Never Land. Jake and Hook's crew decide to join forces to stop his nefarious plot by returning back to their ships before the sunrise. At the end of the episode, Captain Wraith is tricked into saving his treasure and ends up being sucked into the vortex leading to Never-Nether Land. 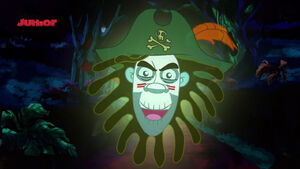 For more pictures and screenshots of Captain Wraith, click here.