Jake and the Never Land Pirates Wiki
Register
Don't have an account?
Sign In
in: Characters, Pirates, Captains,
and 8 more

Captain of the Spirit of the Seas

To be reunited with lost love Peg-Leg Peg

Not being able to see Peg-Leg Peg, thieving pirates

Reunited with Peg-Leg Peg and ascend into Pirate Paradise

"Haunting this old ghost ship does a real number on my allergies".
"Kiddo, in Never Land, every legend has some truth to it."
"Once I get there, I can finally see my pirate girl, Peg-Leg Peg.Boy, I miss her".
" I never thought this day would come!"
"Farewell, kiddies!Thanks for everything! "

“ My own legend has some "tooth" to it. ”
―Captain Treasure Tooth

Captain Treasure Tooth is a recurring character from the Disney Junior animated series, Jake and the Never Land Pirates. Treasure Tooth is a friendly pirate ghost who befriends Jake and his crew during their exploration aboard his ship. He was voiced by the late Carl Reiner.

“Can't be too careful. There are greedy pirates about.Long ago, they stole me golden figurehead.”
―Captain Treasure Tooth

Not much is known about Treasure Tooth's life before or how he died, other than that he is a captain. He's been sailing the vast Never Sea aboard his vessel the Spirit of the Seas in search of his lost golden figurehead which was stolen from him a long time ago. Treasure Tooth continues his search even in his afterlife so he can ascend into Pirate Paradise and be reunited with his long lost love Peg-Leg Peg.

Treasure Tooth first appeared in the episode "Pirate Ghost Story". Jake and his crew discover the Spirit of the Seas while sailing one night and decided to come aboard after hearing various tales of the ship.Cubby was wary to come aboard the ghost ship fearing it to be home to scary spirit, but Jake assured his matey that there nothing to fear. Suddenly while exploring captain cabin, Treasure Tooth reveals himself to the young pirates, giving them a bit of a fright. But much to Jake and his crew surprise Treasure Tooth meant them no harm. Treasure Tooth soon explains he been searching his lost golden figurehead so he can be reunited with his beloved Peg-Leg Peg in Pirate Paradise but he's been having trouble uncovering the various clues of his Ghost map to find his treasure. Jake and his crew agree to assist Treasure Tooth on his quest. The first clue sends the pirates sailing to Skull Rock, where they needed to find a way to light up the eyes of the rock formation to lead them the to next the clue. But thanks to the assistant of the young pirate's firefly companion Brightly shining his light reveals a path down a mysterious lagoon. While searching the lagoon Jake his crew spot a golden glow emitting from a waterfall it was Treasure Tooth's lost golden figurehead, Treasure Tooth was delighted to have his treasure once more and return back to his ship. Suddenly Captain Hook arrives demanding the golden figurehead for himself but as he attempts to steal Treasure Tooth's golden figurehead he loses his footing and falls into the Never Sea allowing the Spirit of the Seas to take flight for Pirate Paradise. Treasure Tooth is last seen entering the gates of Pirate Paradise and reunited with his love Peg-Leg Peg who been waiting for him. The couple soon sings in delight of their reunion.

Treasure Tooth reappears in the episode "Captain Scrooge," serving as all three ghosts from "A Christmas Carol," on a mission to reform Captain Scrooge (played by Captain Hook) and show him the spirit of Winter Treasure Day.

Treasure Tooth reappears in the episode"Phantoms of Never-Nether Land", Treasure Tooth need Jake and his crew help to retrieve the Spirit Key from the mischievous prankster ghost Ghostly Bob and his crew in order to return to Pirate Paradise and free Peg-Leg Peg who is locked within the golden gates. It was latter revealed that Ghostly Bob and his crew were tricked into stealing the Spirit Key in order to free the wicked pirate Captain Wraith from the Never-Nether Land.

While not having anything to do with the plot of the episode Captain Treasure Tooth makes a brief cameo appearance in the episode special "The Legion of Pirate Villains" During the post-credits, he and Peg-Leg Peg are seen being introduced by Jake to Captain Colossus. Treasure Tooth is later seen riding the Mighty Colossus with the rest of Jake's Never Land friends. 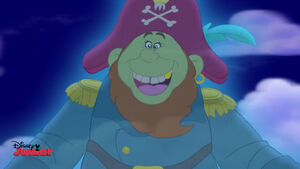