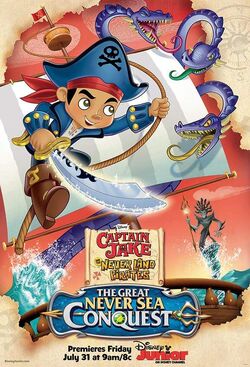 Previous Episode:Croctastrophy! Next Episode: Into the Heart of Coldness

Captain Hook is sailing through a stormy Never Sea and facing sea monsters. However, it turns out to be a nightmare do following Jake and his crew without sleep. The Jolly Roger crew is following Jake and his crew on the search for Captain Colossus's sunken battleship the Mighty Colossus and it's treasure. After sending Jake and his crew packing, Hook looks for the Mighty Colossus but soon concludes that it's a wild goose chase. However, the Jolly Roger's anchor soon get caught in some and accidentally frees the evil mer-wizard, Lord Fathom who heads for Neptune City, where he tricks Queen Coralie into helping him get the DarkLight Emerald and then imprisons her, Marina, and Stormy and takes over Neptune City.

After her Capture, Queen Coralie sends Sandy the Starfish to find Jake and his friends for help, while Fathom begins taking control of the various sea creatures in with the power of the DarkLight Emerald. Jake and his crew head to Neptune City while Fathom heads toward Dreadnaught Cove. Meanwhile Captain Hook still desperate for treasure, order his crew to search the Never Sea filling it with nets soon Fathom confronts Hook, he orders the captain to remove the nets from his sea but the greedy captain refuses to take orders from the low some creature and attempt to steal the DarkLight Emerald from Fathom. However the mer-wizard power proved too great for Hook and his crew, luckily Jake and his were sailing nearby and came to Hook's aid. However Fathom power was even too great for the combined forces of Jake and Hook's crew sending them flying Cubby figures they can't defeat Lord Fathom on their own so Jake decided they need help from the best captains of the never sea to fight the mer-wizard, Jake tells Skully to deliver a message to the captains to report to Never Land beach for an emergency meeting , he reveals he intends to unleash the Strake, the most ferocious monster in the Never Sea. To deal with this new threat, Jake creates the League of Never Sea Captains: Himself, Captain Hook, Captain Flynn, Captain Frost, and Beatrice Le Beak. The League tries to stop Lord Fathom but he's too powerful so Jake decides that they need to regroup somewhere Lord Fathom can't find them and devise a new plan of action to defeat him. Jake's sword suddenly makes the Mighty Colossus rise out of the water and makes him it's captain.

Add a photo to this gallery
Retrieved from "https://jakeandtheneverlandpirates.fandom.com/wiki/Captain_Jake_and_the_Never_Land_Pirates:_The_Great_Never_Sea_Conquest?oldid=88880"
Community content is available under CC-BY-SA unless otherwise noted.