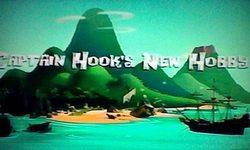 While Mama Hook enjoys her favorite pastime painting on Shipwreck Beach. The rest of the Jolly Roger crew decide to show their favorite hobbies much to Mama Hook delight. Suddenly Captain Hook shows up to see what all the cheering is all about and learns from his mother that everyone sharing their hobbies. Hook reveals that he doesn't see the point of having a hobby when there are more important tasks to be done like finding treasure. Mama Hook suggests her son find a hobby, as it may help him find a treasure. Hook's crew tries various means during the musical number to find the cranky captain the perfect pastime but nothing seem to work. Suddenly Jake and his crew arrive on Never Land. Hook's crew informs them of their predicament with trying to find Hook a hobby. Captain Hook is reluctant to receive aid from the puny pirates but can't resist the chance for treasure and accepts.

Cubby suggest gourmet cooking may be the perfect pastime for Hook. The captain seem to have a knack for cooking using his various hooks to peel potatoes. But Hook soon gets ahead of himself, adding various other ingredients to the dish as he imagines the smile on his mother's face. Once the captain finishes the dish he makes sure his mother is the first to taste it. Unfortunately Mama Hook informs him that cooking isn't hiss hobby as she tries to keep her son's dish down. Izzy was next to try to help Hook find a hobby. Out on the Never Sea, she suggests whale riding. Captain Hook isn't impressed with the idea but Izzy assures Hook it's fun and that he's perfectly safe aboard Bertha the Blue Whale as long as he talks softly due to the whale's sensitive nature. Izzy encourage Bertha to swim forward and everything seem to be going smoothly, with both Hook and Bertha were enjoying themselves. Mama Hook soon sails over aboard the Jolly Roger encourage her son to keep up the good work. Hook assures his mother he is having fun, proclaiming himself the best whale rider ever and decides to show off by forcing Bertha to swim faster. But the whale declines and Izzy tries to remind Hook to speak gently to Bertha. Not pay any attention to Izzy's warning, a furious Hook yells at Bertha to move forward. The whale has quite enough of Hook's orders, diving below the depths of the Never Sea at great speed before returning to the surface causing Hook to slide down to her tail before launching the captain into the air only for Jake to save him with a little assistance from Bucky's coconut scooper.

Jake was the last to attempt to teach Hook a hobby while back on Shipwreck Beach, suggesting Sail Wagon construction, showing the one he built all by himself. Captain Hook admits that building a Sail Wagon looks like fun but comments that Jake's wagon is too puny. Hook is certain he can build one much more grand and fitting of a pirate captain of his stature. Using pieces from the various wrecked ships on the beach and the part Jake provides, Hook constructs a massive sail wagon. Jake tries to inform Hook that he may have gone overboard by creating the huge sail wagon but Hook begs to differ, believing it truly symbolizes him as he climbs aboard his creation. Soon the wind catches Hook's wagon sails but the captain can't control it as he races across Shipwreck Beach. Jake and his crew give chase with the assistants of Izzy's pixie dust but it is too late. By the time the young pirates catch up to Hook his sail wagon is destroyed. Hook emerged from rubble dreading what his mother will think ruining her paint with the mess but much to his surprise his mother isn't upset but rather pleased at the piece of artwork he's created on large boulder among the chaos. Mama Hook is so proud of her son handy work, and Hook is so pleased he finally found a hobby of his very own, painting like his dear old mother. With Hook finally having a hobby of his very own Jake and his crew soon return to Pirate Island to place their gold doubloons into the Team Treasure Chest. Skully reveals that Mama Hook and Captain Hook aren't the only artists on Never Land as he finishes painting a cracker much to his amusement.

Meanwhile back on Never Land Hook is finishing his mural of all the various hobbies he tried before discovering his true passion. Much to Mama Hook's glee at her son's master piece. Hook is pleased with the work as well, admitting he was truly having fun. Sharky and Bones are also seen marveling at their captain's artwork enjoying the various colors especially, Hook's latest piece adding Tick-Tock the Crocodile. Captain Hook is pleased but soon becomes confuse, not recalling painting the infernal beast. The captain's confusion is soon replaced with fear as he turns to see the croc blink and chuckle as he licks his lips before letting out a mighty roar, sending Hook fleeing across the beach and later into the Never Sea screaming for his mother and crew to save him with the crocodile in pursuit.

Retrieved from "https://jakeandtheneverlandpirates.fandom.com/wiki/Captain_Hook%27s_New_Hobby?oldid=37395"
Community content is available under CC-BY-SA unless otherwise noted.