Start a Wiki
Captain Hook's Hooks are objects owned by the evil pirate Captain Hook. The captain use his vast collection of hooks to steal treasure from Jake and his crew. Captain Hook keeps all his special hooks in his Cabinet of Hooks.

In the episode Hide the Hideout! Captain Hook and Mr. Smee attempt to claim Pirate Island as there own by climb up the side of the hideout and finds a closed hatch door that.Captain Hook attempts to use his plunger-hook to open the door but is quickly distracted by Cubby flying and content buzzing, allowing Jake and his crew hide the hideout.Hook tries swatting at Cubby using his fly-swatter hook, but as the captain swings he loses hid footing and falls on a zip-line and sent zipping away and falls down another open hatch into the hideout into and out of the hideout and into the Never Sea once again.

In the episode The Never Land Games Jake, Izzy, and Cubby challenge Captain Hook and his crew on a series of obstacle courses to win the Never Land Games trophy.During the first challenge Jake and Hook had to climb an old shipwreck and ring the bell at the top.Jake already had huge lead using a hang vine, but Captain Hook soon caught up using his Whirly-Hook to fly up pass Jake,but this is short lived as Hook loses control of his Hook and loses the first event to Jake.During the second event a race on raft across Shipwreck Beach's lagoon Hook attempt to use Eggbeater-Hook as a ship-motor.Hook gradually makes into the middle of the lagoon when he's sudden attack by Tick-Tock the Crocodile who emerges out the water attempting to eat the terrified captain, causing Hook's raft to sink losing the second event. In the episode "Captain Hook's Hooks" Captain Hook notices that his prized collection of hooks are filthy. He orders Sharky and Bones to clean them but while they were cleaning the Orange Octopus creeps aboard the Jolly Roger and steals eight of Captain Hook's hooks forcing Sharky and Bones to pursue the sneaky cephalopod to Never Land with the help of Jake and his crew.

In the episode "Hook's Hookity-Hook!" the Captain get fed up with switching between his hooks so he invents an all in one Swiss army hook called the "Hookity-Hook" so he'll always have every hook in his collection on hand.But it becomes too hard for Hook to control, forcing him to revert to many individual hooks once more.

When Beatrice Le Beak and her pet falcon Fast Claw are held captive by Captain Hook and his crew at the end of the episode "Jake and Sneaky Le Beak!" and forced to walk the plank, but Beatrice and Fast Claw evade capture and a watery fate with Captain Hook's Whirly-Hook.

In the episode "Pirate Pals!" Beatrice is captured yet again by the combined forces of Captain Hook and Jake's crew. Hook plans on leaving Beatrice Le Beak stranded on a deserted island, but before Hook could put his plan into motion Beatrice Le Beak makes her escape yet again with Hook's Whirly-Hook.

In the episode "The Sneaky Snook-Off" Beatrice and Captain Hook both rely on the Whirly-Hooks to cheat during the race to Belch Mountain.Later during the final phase of the Sneaky Snook-Off held in Crocodile Cavern Hook attempts to ring the gong from a far using one of his hooks but Le Beak's pet falcon Fast Claw intervene.

In the episode "Captain Hookity-Hook!",Captain Hook was set to head to Aviator Isle to uncover its hidden treasure right away but is quickly distracted by his crew amusing themselves with Hook's old mechanical invention the Hookity-Hook that they finally manage to capture and confined within a small cage.Hook gets a closer look at Hookity-Hook regretting ever creating the blasted thing.Suddenly the Hookity-Hook frees itself from its bonds and forces Hook and his crew to abandon ship as they try to capture it.With the Hookity-Hook in control of the Jolly Roger it set off for the treasure.Hook reluctantly agrees with Mr. Smee plan to allow Jake and his crew assist in stopping the Hookity-Hook but it proved to be tricky for the young pirates and there robotic pirate comrade Captain Gizmo alone and flees to the Jolly Roger's rowboat heading to Aviator Isle with Jake and Hook's forces in pursuit.

In the episode "The Golden Hook",Captain Hook finds the legendary Golden Hook, which turns anything it touches into gold.With the power of his new hook the captain is fuel by his desire to turn the very island of Never Land and its inhabits into gold even his own crew and ship with no remorse, believing them to be more valuable to him this way.Seeing the captain has finally lost him self in his new found power Mr. Smee retrieve Jake and his crew for help return Sharky and Bones back to normal.A battle later erupts between Jake and Hook, but Jake manages to trick Captain Hook into turning himself gold allowing Jake the chance to retrieve the Golden Hook and destroy it by tossing it into the fires of Belch Mountain turning everyone and everything back to normal

In the final episode "Pulley Hook",Skully ask the viewers to help Captain Hook figure out which hook he should use to reach a treasure on a faraway island.

Captain Hook's butterfly net-hook makes a brief appearance in the episode "Flying", Hook steals Skully's presents from Jake and his crew and flee to Shipwreck Rock.

Captain Hook's hook makes a brief cameo in the episode "I've Got my Sword", As Jake mentions various pirates have objects dear to them, for the Captain Hook it's his hook.

Captain Hook uses his Whirly-Hook in the episode "Stormy Seas" as a propeller in attempt to beat Jake and his crew to the Pirate Pieces of Eight located at Trident Rock but Bucky proved to swift for Hook's hook.Captain Hook refused to be beaten to another treasure and armed him with his cannon hook (Boat Buster-Hook) to blast a hole into Bucky causing him to sink.While Jake and his crew repair Bucky they spot the Pirate Piece of King Neptune they were searching for and manage to fish it out of the Never Sea before Captain Hook could with his Fishing Rod-Hook.Captain Hook tries one last attempt to reclaim the Pirate Piece armed once more with his Boat Buster hook but thanks to Pirate Piece of King Neptune deflect the blast right back to Hook causing a massive tidal wave forcing Hook and Smee to flee.

Like in the television series Captain Hook's hooks are a recurring element featured in the various books again aiding Hook in his quest to collect and plunder treasure from Jake and his crew.In the book, "My First Look Find Jake and the Never Land Pirates". On the Jolly Roger the reader most find certain hook's from Captain Hook's collection that are scatter across the deck of the Jolly Roger.

Like in the television series Captain Hook's hooks are a recurring element featured in video games.In the online game "Izzy's Flying Adventure." Captain Hook uses his Whirly-Hook to escape with the Team Treasure Chest through the skies over the Never Sea all the way to the island of Never Land. Hook uses the hook again while pursuing Jake and his crew after the young pirates manage to reclaim there treasure chest from Hook and Smee.

In the online game "Ready,Set,Hook" Captain Hook and Mr. Smee celebrate the Never Land Hook-A-Thon.Captain Hook most utilize his various collection of hooks to complete the three challenges to win the Hook-A-Thon.In the online game "A Treasure for Mama Hook." Captain Hook and Mr. Smee take Mama Hook for a treasure hunt but doesn't have a clue where any treasure can be located.Unknown to Hook and Smee Jake and crew overhear and decided to help.Hook uses his shovel hook to uncover the treasure.

In the Disney Junior online "Plundering Pup" Jake and his crew have to catch Patch the Pirate Pup and retrieve Captain Hook's boots and hooks that are scatter all across Never Land.Have-a-Banana Grove is one of the levels and the player most be wary of banana pills within the grove.

In the online game Disney Junior App "Soaring Over Summer Arcade",When Jake reaches the top of the level and tries retrieve the treasure,Captain Hook will toss Whirly-Hooks in order to stop the young pirate from reaching the treasure.

Captain Hook's hooks appear briefly in the live musical stage show as Hook devise a plan to steal Cubby's map so he could uncover the means to unlock the treasure hidden inside a mysterious volcano on Never Land.While searching through his collection of hooks Captain Hook and his crew sing Hook's Hooks. 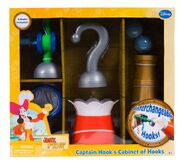 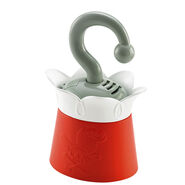 Retrieved from "https://jakeandtheneverlandpirates.fandom.com/wiki/Captain_Hook%27s_Hooks_(object)?oldid=91631"
Community content is available under CC-BY-SA unless otherwise noted.