"The Island of Doctor Undergear"

Playing catch with Jake and his crew,helping others

Becomes friends with Jake and his crew

Captain Gizmo is a recurring character featured in the Disney Junior series Jake and the Never Land Pirates. He's a mechanical pirate that wash ashore on Pirate Island beach where he was put together and became fast friends with Jake and his crew. He is voiced by Dee Bradley Baker.

Captain Gizmo was originally created by the evil mad scientist Doctor Undergear who plot to use the mechanical pirate to lead his robotic forces in his quest to take over Never Land. But before Undergear knew it the crate containing Gizmo washed away from Gear Island and onto Pirate Island.

Captain Gizmo is very energetic and always happy go lucky, he is willing to help others with any task within his power. Equipped with various gadgets and features at his disposal he rarely finds any task he can't complete.

Captain Gizmo first appeared in the episode of the same name confined within a crate that washed onto Pirate Island, where he is found by Cubby, Jake and Izzy who, by quickly following Gizmo's blueprint, construct the mechanical pirate. Jake and his crew quickly took a shine to their new matey and marvel at all the feats he could do while they played a game of catch. Unaware that they weren't the only one taken by Gizmo, Captain Hook decides to take the mechanical pirate for himself while he was out of the young pirate crew's sight.

Captain Hook orders Gizmo to bring him the treasure of Belch Mountain that lies deep within the volcano, which proved too dangerous for Hook's bumbling crew. Gizmo does as he is told making his way through the bowls of Belch Mountain reaching the treasure and making his way back across a lake of lava when his power begins winding down when Jake and his crew catch up to Hook. Using her pixie dust, Izzy rescue Captain Gizmo from the lava, but before the pirates could go Belch Mountain threatened to erupt sealing them within the volcano. Cubby quickly winds Captain Gizmo to rescue both Hook and the rest of the crew. Captain Gizmo is last seen back on Pirate Island with Jake and his as they put the doubloons they gather in their adventure into the Team Treasure Chest.

Captain Gizmo reappears in the episode"Captain Hookity-Hook!" when Captain Hook's Hookity-Hook proves too difficult and crafty that even Jake and Hook's forces can't detain it. Jake and his friends end up summoning Captain Gizmo's aid in order to stop the Hookity-Hook from reaching the treasure of Aviator Isle.

While Gizmo himself doesn't appear in the Disney Junior online game "Super Pirate Powers", he is briefly mentioned when Jake discovers his gear allowing him to use a robotic power suit resembling Gizmo's body. The suit allows Jake to safely cross streams of lava and to push heavy metal crates with great ease. 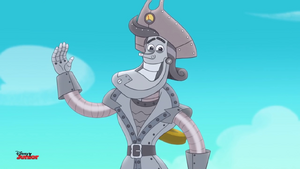 Retrieved from "https://jakeandtheneverlandpirates.fandom.com/wiki/Captain_Gizmo_(character)?oldid=91588"
Community content is available under CC-BY-SA unless otherwise noted.