Ice and snow,sailing the high seas

"I know all there is about cold, but when it comes to hot, the pirate to call on is Captain Flynn!"
"Now, break me free and I'll spin ya' a yarn that will chill your bones!"
"Listen well. There is a bad wind blowin' in Never Land."
"The Winter Hawk will take us where we need go, eh!"
I, Captain Frost come to the rescue!
Your pixy dust is magnifique!
Ha-ha. A fitting punishment for a cold-hearted scoundrel.
Now, my young friends, I must hurry the snowflake to the Never North where it is also needed.
Farewell, my mateys. But please, do me the great honor and come and visit the Never North.The weather may be cold, but your welcome will be most warm!

“In from the cold and eager to heat things up, mon ami! ”
―Captain Frost

Captain Frost is a recurring character from the Disney Junior series Jake and the Never Land Pirates. He's a pirate from the icy Never North on the other side of the Never World. He is voiced by Harland Williams.

As a pirate of the frozen Never North Captain Frost can endure great cold and as he states in his debut, Frost prides himself in knowing all matters regarding the cold.

Captain Frost makes his first appearance in the episode "ShiverJack", while Jake and his crew were planning to watch Belch Mountain erupt the volcano is miraculously frozen before their eyes. While investigating the scene Jake and his crew spot Captain Frost's ship the Winter Hawk and discover Frost trapped within a cage of ice. After his release, Captain Frost soon explains that the wicked pirate sorcerer ShiverJack has returned. Suddenly, ShiverJack reveals himself from a gust of icy wind, determined to freeze Never Land once more. When Jake protests that Never Land will never belong to the pirate sorcerer, ShiverJack attempt to freeze Jake and his crew with his trident, but they manage to dodge the trident's blast. Unfortunately,Bucky wasn't as lucky, and was frozen solid. Captain Frost suggest they find someone with a vast knowledge of heat to melt ShiverJack's enchanted ice, thus giving Jake the idea to send Skully to the Never Land Desert to retrieve Captain Flynn assistant to deal with ShiverJack.ShiverJack soon confronts Jake and his mateys once more this time freezing both Izzy, Cubby and Captain Frost in the process leaving Jake alone to deal with the ice elemental, assured of his victory ShiverJack plunge his trident in the frozen ground sending Jake plummeting to his doom before heading off to Skull Rock. Little did ShiverJack know Jake manage to reach Izzy's pixie dust pouch just in time and soon confronts ShiverJack at Skull Rock, ShiverJack attempts to freeze Jake but the magic of Jake's sword proved too powerful even for ShiverJack's trident. A short battle between both pirates begins ShiverJack manages to knock Jake's sword away, believing he has truly won ShiverJack transforms Skull Rock into his icy throne. This is short-lived as Skully has returned with Captain Flynn who has a magical orb containing the Never Winds which has the power to melt even ShiverJack's enchanted ice. Jake load the orb into the cannon aboard Flynn's ship and fires it on ShiverJack weakening both the ice elemental and reverting his ice magic from Never Land. Captain Frost is last seen after ShiverJack defeat alongside Izzy, Cubby, and Bucky to congratulate for his victory.

Captain Frost reappears in the episode of the "same name", Jake and his crew first meet the captain of the frozen Never North, Captain Frost, find a magical gem the North Wind Snowflake after it is stolen by Captain Hook.

Captain Frost reappears in the episode special "The Great Never Sea Conquest". When the evil Mer-wizard named Lord Fathom is released from an underwater prison, he sets out to take over the Never Sea by awakening the legendary giant, three-headed serpent, the Strake. Captain Frost was amongst the team of the greatest captains of the Never Sea to battle the powerful Lord Fathom and the terrifying Strake.

Captain Frost reappears in the episode "Peter Pan's 100 Treasures!" He is one of the contestants alongside Captain Jake and the other Never Land captains competing in a scavenger hunt hosted by Peter Pan.

Captain Frost's only appearance in printed media is the storybook adaption of the episode special The Great Never Sea Conquest. 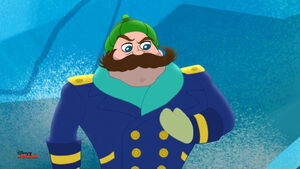 Retrieved from "https://jakeandtheneverlandpirates.fandom.com/wiki/Captain_Frost_(character)?oldid=84299"
Community content is available under CC-BY-SA unless otherwise noted.