"Pirates of the Desert"

To find his ship, the Barracuda (succeeded)

The Great Pirate Pyramid in the Never Land Desert

Treasure, the high seas, Camille, Jake and his crew

Being marooned, Captain Hook, any other villainous force that threatens his friends and home

"Ahoy there, young mateys!"
"Me ship, the Barracuda, was wrecked here in the desert. Then I lost sight of her, and I haven't been able to find her since."
"I had to search for grub and water. Wander, I did, a'thirstin' and a'lost, and a'baking like a biscuit."

Captain Flynn is a recurring character from the Disney Junior animated series, Jake and the Never Land Pirates. He is a dashing pirate who is well known for his legendary adventures on the Never Sea. Captain Flynn and his ship, the Barracuda, are plucked from the sea in a giant windstorm and shipwrecked in the Never Land Desert, where Jake and his crew later find him. He is voiced by Josh Duhamel.

Captain Flynn is the most famous pirate to ever sail the Never Sea, much to Captain Hook's dismay. To pirates, and the inhabitants of Never Land altogether, Flynn is viewed as a heroic celebrity, having many fans and admirers. He sails brilliantly across both land and sea on his mechanical ship, the Barracuda, which has built-in wheels that activate when on a terrain. He is accompanied by his loyal camel companion Camille.

Flynn meets Camille after his ship the Barracuda get caught in a powerful storm that picks up the Barracuda, leaving Captain Flynn shipwrecked in the middle of the Never Land Desert. Desperate for water, Captain Flynn tries to find some by traversing the desert, but during Flynn's search, he becomes lost within in the desert, and since the heat of the desert was taking its toll on him, he could not recall where the Barracuda is and soon collapses due to intense heat of the Never Land Desert. When all looked lost, Captain Flynn was saved by Camille, who led him to a source of water within the desert and they became friends ever since.

Captain Flynn first appeared in the episode "Pirates of the Desert". It is a windy day in Never Land and the wind blew various things onto a tree on Pirate Island. Skully discovers a piece of paper that is actually a note of help sent by Captain Flynn who is trapped in the Never Desert. The crew travels there to find a camel. The camel belongs to Flynn and is named Camille. Flynn asks the crew to help find his ship which he lost when he was shipwrecked. The wreck also wiped out Flynn's memory. He remembers a few things which Izzy and the crew use to retrace the steps of Flynn. Eventually, they recover the ship but Captain Hook and Smee are there first. Hook claims the ship as his own and plans on taking control. Earlier that day, Cubby learned that Camille's way of playing is head butting. So, Jake asks Camille to play with Hook, knocking the captain and Smee off the ship. Izzy then uses pixie dust on the ship to fly over to Pirate Island where Flynn and Camille decide to stay until the ship is repaired.

The next episode "The Great Pirate Pyramid", Flynn finds a broken map piece in his ship's quarters. Cubby quickly understands the map and tells the crew that it leads to the Great Pirate Pyramid. With the ship repaired, they set sail. While out in the Never Sea, Sharky, one of Hook's crew members, reveals his talents to read lips and begins to read those of Izzy and Cubby using a telescope to see up close. He does so successfully having Hook wanting to find the pyramid. Once they reach their destination, Camille finds the complete map and connects the broken piece. The map becomes a moving painting and reveals that the pyramid is available to be a hideout to a great pirate and is able to hold a ship inside. Flynn decides to reside at the pyramid and loads in The Barracuda. Jake, Izzy, Cubby, and Skully bid Flynn a farewell.

Captain Flynn appeared again in the episode "Tricks, Treats and Treasure! " Jake and his crew's last stop during their Trick or Treating was Flynn's Pyramid. Like the rest of the characters in the episode, Flynn was in a Halloween costume. He was a Mummy.

Captain Flynn reappears in the episode "Captain Flynn's New Matey", where he sends Camille to retrieve Jake and his crew. Flynn needs Cubby to read a special map to a special treasure in the Never Land Desert.

Captain Flynn reappears in the episode "Sand Pirate Cubby!" Flynn appoints Cubby and Bones the test of the Never Land Desert to become a Sand Pirate.

In the episode "Song of the Desert", Sharky and Bones have invited Flynn to perform in a concert held in Never Land which in reality was a scheme cooked up by Captain Hook to lure Flynn from the pyramid allowing Hook and Smee to raid the pyramid for treasure.

Captain Flynn makes a nonspeaking cameo in the episode "Smee-erella!", attending Red Jessica's Pirate Convention. He could be seen conversing with Misty the Wonderful Witch. Later, the two are seen dancing during the pirate waltz. Flynn is last seen sailing his ship, the Barracuda, in the pirate ship parade.

Captain Flynn makes a reappearance in the episode "Cubby's Tall Tale", sharing his various pirate tales with his young mateys on Shipwreck Beach. Once it became Cubby's turn to tell a tale, Cubby exaggerates his tall tale about his buried treasure at the top of Hidden Peak. Captain Hook overhears and sets off to find it, taking Cubby's map. Jake and his crew, accompanied by Flynn, start a chase after Hook, but once they reach the river, Jake and his crew went ahead. Flynn later reappears to confront Hook and his crew, with the assistance of his fire belching friend, Belchy the dragon, forcing Hook and his crew to flee and leave the treasure.

Captain Flynn reappears in the episode "ShiverJack". Skully is sent to retrieve Flynn assistant to deal with the wicked pirate sorcerer, ShiverJack, who is bent on taking over Never Land. Flynn finally arrives at Jake's aid with a magical orb containing the Never Winds of Marlagoth from the Never Land Desert, which is hot enough to defeat ShiverJack.

Captain Flynn reappears in the episode "Captain Scrooge". It was revealed during Captain Scrooge's (portrayed by Captain Hook) visit by the ghostly Captain Treasure Tooth as they journey into the past that Hook, Smee, Red Jessica, and Flynn had adventures together as children on Never Land. When the young pirates discover a map in a bottle, Scrooge swipes it for himself, but soon forgets where he hid as he grew older. Captain Flynn reappears at the end of the episode in the present taking part in the great Pirate Feast celebration.

Captain Flynn reappears in the episode "Tiki Maskerade Mystery", where he attends the Tiki Trees party. Jake and Captain Hook's teamed up to catch a thief when the Golden Tiki was stolen during the Tiki Maskerade.

Captain Flynn reappears in the episode special "The Great Never Sea Conquest". When the evil Mer-wizard named Lord Fathom is released from an underwater prison, he sets out to take over the Never Sea by awakening the legendary giant, three-headed serpent, the Strake. Flynn was amongst the team of the greatest captains of the Never Sea to battle the powerful Lord Fathom and the terrifying Strake.

Captain Flynn reappears in the episode "Mystery of the Mighty Colossus", where Captain Colossus's ex-first mate, the Grim Buccaneer, decides to abduct Jake's crew and even Captain Hook's in an attempt to reclaim the Mighty Colossus, and so Jake must prevent the Grim Buccaneer from achieving his goal. Captain Flynn was among the other pirates to assist Jake to stop Grim from taking over the Mighty Colossus. Grim soon gets the upper hand due to his underhanded tricks and knowledge of the Mighty Colossus, gradually picking off Jake and the others one by one. He later locks Flynn and the other pirates down within the holding cell, holding them prisoners, and plots to abandon them all on Pirate Dread Island, where they will never return. Once at the helm of the Mighty Colossus, Grim savior his victory, if only Captain Colossus could see what he accomplished, but this is short-lived when Jake and the others manage to escape and confront Grim. Grim attempts to flee, but is captured by Jake and his crew. Jake decides to send Grim to Pirate Dread Island, in which there would be the perfect place to keep him from causing trouble in the future, but Grim manages to break free, swearing he will get his revenge.

Captain Flynn reappears in the episode "Peter Pan's 100 Treasures!". He is one of the contestants alongside Captain Jake and the other Never Land captains competing in a scavenger hunt hosted by Peter Pan.

While not having anything to do with the plot of the episode Flynn makes a brief cameo appearance in the special "The Legion of Pirate Villains". During the post-credits, he is seen being introduced by Jake to Captain Colossus as they compare the luster and shine of each other's swords. Flynn is later seen riding the Mighty Colossus with the rest of Jake's Never Land friends.

Captain Flynn makes a brief cameo appearance in "Birthday Bash". He can be seen wishing Jake a happy birthday with the rest of his Never Land friends welcoming him back on Pirate Island.

Captain Flynn reappears in the storybook based upon the episode special "The Great Never Sea Conquest".

Captain Flynn is featured in the Disney Junior online game "Sand Pirates", which is loosely based on the episode of the same name. Flynn gives Cubby and Bones various trials of the Never Land Desert to see if they have what it takes to become a Sand Pirate.

In the online game "The Great Pirate Pyramid", which is loosely based on the episode of the same name, Captain Flynn is playable alongside Jake and the rest of his crew as they explore the Pirate Pyramid for treasure on each floor, while evading Captain Hook and Mr. Smee, to reach the legendary Golden Goblet hidden deep within the Pirate Pyramid. 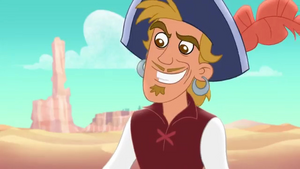 For more pictures and screenshots of Captain Flynn, click here.

Retrieved from "https://jakeandtheneverlandpirates.fandom.com/wiki/Captain_Flynn?oldid=94278"
Community content is available under CC-BY-SA unless otherwise noted.