Martial arts, physical strength and agility,pyrokinesis,magical necklaces that can keep the golden dragon at bay

Sails off to find another cure to rid himself of the Golden Dragon.

Restored to his true form after Jake and his crew returned his dragon tooth necklace.

Captain Chen use to serve a sorcerer and was tasked with guarding his treasure. But soon Chen's greed played on him and he stole the treasure for himself. The sorcerer soon became aware of Chen's actions and punished him by turning him into a golden dragon. Chen soon returned the treasure but it didn't make a difference in what was done. However, the sorcerer showed some form of mercy by giving Chen a magic necklace preventing him from changing into the golden dragon as long as he wears it.

Chen is a responsible man, seen as a fearless warrior, leader, and beloved role model after his past mistakes. He tries to protect the other inhabitants of Never Land from his curse by always wearing the dragon tooth necklace.

While Captain Chen is a largely compassionate entity, The Golden Dragon is a heartless creature with a fiery disposition. Quick to malice aimed to burn everything in his path and will relentlessly pursue his target until they either depart or face a bitter end. However by the time of the episode "The Forbidden City" he has better control over his dragon form and willing changes into at the beginning of the episode and later to face off against Captain Hook when he falls under the effect of the dragon's curse.

Chen wears a green and gold Chinese armor suit that makes him look like he belongs more on a horse than on a ship with a group of pirates. He wears black boots with light green flames references the green flames he breaths in his dragon form. He wears a helmet with the Chinese character for dragon written on it.

In dragon form, Chen has the serpentine body of a Chinese dragon with gold scales, wings, and a pair of horns.

Captain Chen natural abilities can be illustrated through the events of "The Forbidden City" as the demonstrated amazing skills in hand-to-hand fighting and other physical combat techniques as well as skilled use in the of a sword, as well as making tremendous leaps and bounds while fighting. Besides his combat proles he has a somewhat deep understanding of various magical creatures and items, even discovering the various aspects to cure his curse like the Dragon Fang Dust.

Captain Chen first appeared in the episode "The Golden Dragon". His ship was attacked by a golden dragon while sailing Cannonball Cove. Jake and his friends come aboard Chen's ship to help him on his feet. He soon explains to his new friends that he most recovers his stolen magical dragon tooth necklace which allows him to protect everyone from the golden dragon's wrath. Cubby guest that the dragon was the thief, but Chen knew it wasn't the dragon but a more despicable fiend, a pirate with a hook for a hand. Jake and his crew knew it had to be none other than Captain Hook. Jake and his forces attempt to confront Hook and forces and retrieve the necklace when the golden dragon attacks. Giving Hook the chance to flee with the necklace. But once the dragon chases Jake into a cave it soon disappears and Chen reappears lying on a rock, Captain Jake swung over to see if he was okay and when Chen woke up he greeted Jake he was feeling tired, Jake figured he needed to rest, Chen agreed that's what he needed. Once back aboard Bucky, Jake and his crew began to realize that Chen and the golden dragon are one and the same. Chen told his new friends of how he was cursed for his past mistakes and the necklace is the only thing that can prevent the dragon from attacking. Jake and his crew try another attempt to reclaim the necklace from Hook when Chen loses control once more. But during the chaos Hook finally gives up on the treasure believing no treasure is worth dealing with fire breathing terror allowing Jake to return the necklace to Chen turning him back into a pirate. Chen was grateful to Jake and his crew help and promises to return the favor one day.

Captain Chen reappears in the episode "The Forbidden City", Chen comes to asks Captain Jake to help him find the Forbidden City which has a cure for his dragon curse. While journeying through the Forbidden City, Chen and Jake had to face various trials in order to find a means to return himself to normal. But Captain Hook touches the enchanted sorcerers treasure turning himself into a dragon. But with the assistance of Chen and Jake manage to capture Hook. In order to spare Never Land from Hook's fiery wrath, Chen gives up his only means to break the dragon curse and gives it to Hook. Chen is last seen thanking Jake and his crew before leaving Pirate Island to find another means of breaking the curse. 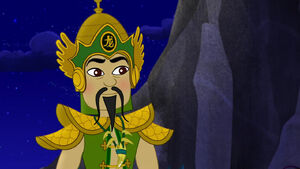 For more pictures and screenshots of Captain Chen, click here.

Retrieved from "https://jakeandtheneverlandpirates.fandom.com/wiki/Captain_Chen?oldid=89760"
Community content is available under CC-BY-SA unless otherwise noted.