Pirate
Captain of the Roost

Exploring the wonders of the Never Sea, treasure, spending time with his grandson

I've sailed with the best, like Cap'n Buzzard!
Well, y'see, I was Buzzard right-hand man, yes. From the time he plundered his first doubloon.
Bonesy, my sweet lad, you're right.
What say we go fetch it.
You see, I knew given the chance, your greed would get you in trouble, Hook.And I be right!
Consider it a lesson for being so mean to my grandson.
Now, I'll be on my way, lads.I'm off to find more adventures 'round the Never World!
And thank you, young mateys!This ol' salt is forever in your debt.
Bonsey, I was gonna ask you to join me.But now I think you should stay with your cap'n.
He needs a real sailor to teach him how to be a real cap'n.
So fare-thee-well, friends and foe!
And you... Hook! Take a care how you treat my grandson!- I'll be watchin'!

Captain Buzzard Bones (better known as Grandpa Bones) is a recurring character from the Disney Junior series Jake and the Never Land Pirates. He is Bones grandfather and later revealed to be a legendary pirate who hid a treasure on Never Land. He is voiced by Rob Paulsen.

While not making a physical appearance in the episode "Bones' Lucky Doubloon!" Bones does mention his grandfather who gave him a lucky gold doubloon that he calls "Bloony". With his good luck charm and the help of Jake and his crew Bones set out to find the lost treasure of Queen Hippolita's hidden on Never Land.

Bones' grandfather makes his first appearance in the episode "Grandpa Bones", He was marooned on a raft in the middle of the Never Sea when Jake and his crew found him and welcome him aboard Bucky. Grateful to his young rescuers he introduces himself a Bones much to the surprise of Jake and his mateys who already knew a Bones. The old pirate was curious to meet this other Bones, Jake and his crew sail to the Jolly Roger where Bones was hard at work swabbing the deck as Captain Hook bellows out more order when Jake and his crew arrive with the elderly pirate who later revealed to be Bones after a warm teary reunion. Grandpa Bones wanted to know if his grandson was happy working aboard the Jolly Roger. When Captain Hook overhears the elder pirates remarks and claims Bones doesn't have time to waste with this reunion ordering Bones to carry out a ridiculous number or task much to Grandpa Bones annoyance at how this selfish old codfish abuse his grandson. Hook demands the old pirate to leave at once but Grandpa Bones refuse to be scared off by the captain revealing he sails with the best the infamous Captain Buzzard. Much to the surprise of both Bones and Captain Hook. Bones suggest they go on a treasure hunt to uncover Buzzard's vast treasure. Jake and his comrades accompanied Bones, his grandfather and Captain Hook to the Pinnacle of Doom on Never Land. Through the course to reclaim Captain Buzzard's treasure,Grandpa Bones had difficulty recalling the direction to Pinnacle Rock fueling Captain Hook rage that Hook picks the path leading the captain into one calamity after another only to be rescued by Jake and his crew at every turn. Once the treasure is uncovered at the Pinnacle of Doom Captain Hook attempt to swipe the treasure but he is quickly subdued by Grandpa Bones who revealed to be none other than Captain Buzzard himself much to everyone surprise. He was merely pretending not to know which way to go knowing Hook's true colors would reveal itself. Before leaving with his treasure Captain Buzzard Bones thanks Jake and his crew for their effort in the adventure before telling Bones he originally plans for him to join him in his explorations across the Never Sea but has high hope in Bones teaching Hook to be a better captain. Captain Buzzard waves farewell and set off for his next adventure not before reminding Hook to be nicer to his grandson because he'll be watching. Back on the Jolly Roger Captain Hook and Bones notice Mr. Smee and Sharky where reading Bones' books about Captain Buzzard, Bones was still in awe that he was related to such a famous pirate, much to the annoyance of Captain Hook still sulking after being bested by the elderly pirate. 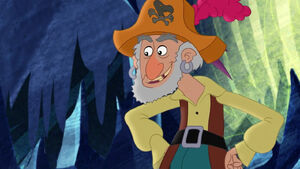 Retrieved from "https://jakeandtheneverlandpirates.fandom.com/wiki/Captain_Buzzard_Bones?oldid=90887"
Community content is available under CC-BY-SA unless otherwise noted.