"Pirates of the Desert"

Her friends in danger

“ And then I found Camille. She led me to water, and we been mateys ever since.”
―Captain Flynn

Camille is a supporting character in the Disney Junior animated TV series Jake and the Never Land Pirates. She is Captain Flynn's loyal camel companion. Her vocal effects are provided by Dee Bradley Baker.

Camille is very resourceful seeing Captain Flynn needed help she quickly comes to his aid when he was hopelessly lost within the Never Land Desert and brought him to a source of water. Camille is very caring towards Jake and his crew, especially Cubby who she adores often seen nuzzling him. Captain Flynn cherish Camille as an important member of his crew.

Camille first appeared in the episode "Pirates of the Desert", Jake and his crew met Camille and her owner Captain Flynn when the puny pirate team traveled through the vast Never Land desert. Cubby learned that Camille's way of playing is head-butting. So, Jake asks Camille to play with Hook, knocking the captain and Smee off the ship. Izzy then uses pixie dust on the ship to fly over to Pirate Island where Flynn and Camille decide to stay until the ship is repaired.

The next episode "The Great Pirate Pyramid!", Flynn finds a broken map piece in his ship's quarters. Cubby quickly understands the map and tells the crew that it leads to the Great Pirate Pyramid. With the ship repaired, they set sail. While out in the Never Sea, Sharky, one of Hook's crew members, reveals his talents to read lips and begins to read those of Izzy and Cubby using a telescope to see up close. He does so successfully, having Hook wanting to find the pyramid. Once they reach their destination, Camille finds the complete map and connects the broken pieces. The map becomes a moving painting and reveals that the pyramid is available to be a hideout to a great pirate and is able to hold a ship inside. Flynn decides to reside at the pyramid and loads in The Barracuda. Jake, Izzy, Cubby, and Skully bid Flynn a farewell.

Camille returns in the episode "Captain Flynn's New Matey". She was sent by Flynn to bring the puny pirate crew to the Pirate Pyramid since he needed Cubby's help reading a special treasure map. Camille accompanies Flynn, Jake, Izzy and Cubby to uncover the Golden Goblet hidden within the depth of underground labyrinth in the Never Land Desert. Along with Captain Flynn, Camille attended Jake's birthday celebration with the rest of the pirate teams and Never Land friends in "Jake's Birthday Bash!"

Camille reappears in the episode "Sand Pirate Cubby!" She was sent by Flynn to bring Jake and his crew to the Pirate Pyramid so Cubby could take part in the test of the Never Land Desert, and become a Sand Pirate. Camille also took part in the trail as Cubby and Bones transportation through the desert.

In the episode "Song of the Desert" , Camille transports Captain Flynn, Sharky and Bones who have invited Flynn to perform in a concert held in Never Land which in reality was a scheme cooked up by Captain Hook to lure Flynn from the pyramid, allowing Hook and Smee to raid the pyramid for treasure.

Camille reappears in the episode "Sandblast!", she served as Captain Flynn's pit crew in the sand sail wagon race between Flynn, Jake and Captain Hook in order to determine which pirate captain will be allowed to open the treasure they found.

In the Disney Junior online game "The Great Pirate Pyramid" Camille makes a cameo as a puzzle within the Pirate Pyramid Captain Flynn, Jake and the rest of his crew have to solve in order to venture deeper into the Pirate Pyramid to reach the treasure hidden on each floor while evading Captain Hook and Mr. Smee.

Camille makes a minor appearance in the online game "Sand Pirates" loosely based on the episode of the same name. Captain Flynn gives Cubby and Bones various test in the Never Land Desert to see if they have what it takes to become sand pirates. 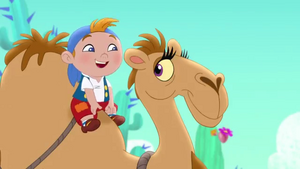 For more pictures and screenshots of Camille, click here.

Retrieved from "https://jakeandtheneverlandpirates.fandom.com/wiki/Camille?oldid=90914"
Community content is available under CC-BY-SA unless otherwise noted.