Cameron Boyce (May 28, 1999-July 6, 2019) was an American actor, dancer and model, best known for his roles in the feature films, Mirrors, Eagle Eye and Grown Ups, as well as for his co-starring role as "Luke Ross" on the Disney Channel comedy series, Jessie. He would later provided the voice of Jake replacing Colin Ford in season two of Jake and the Never Land Pirates from 2013 to 2014 until he was replace with Sean Ryan Fox. Cameron would later return in the series in season four he guest stars as the voice of ChillyZack in the episode "Jake's Cold-Hearted Matey". 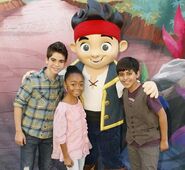 Add a photo to this gallery
Retrieved from "https://jakeandtheneverlandpirates.fandom.com/wiki/Cameron_Boyce?oldid=88051"
Community content is available under CC-BY-SA unless otherwise noted.