Bucky's Shanty is one of the various closing songs featured in Jake and the Never Land Pirates. The song preformed by Sharky and Bones. It also serves as Bucky's theme song, playing instrumentally whenever he is onscreen.

Bucky, a ship so grand shoving off from land is he

With my mates and me, a-sailing on the Never Sea

When his bell is ringing, Bucky's singing

When the sails are full we can shout yo-ho

And Bucky pulls away from shore

With my mates and me, a-sailin' on the Never Sea

Hoist away, there, Bucky

Run up the sails and ride the tide

Hoist away, there, Bucky

With your pirate flag a-flyin' high

Now, he's rocking on the waves as he sails away

Wherever the wind may blow

He's a ship that's true but a shipmate too

And Bucky knows the way to go

With my mates and me, a-sailin' on the Never Sea 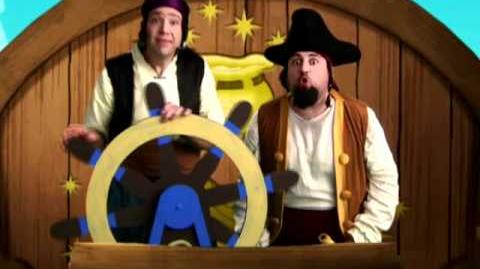 Retrieved from "https://jakeandtheneverlandpirates.fandom.com/wiki/Bucky%27s_Shanty?oldid=88233"
Community content is available under CC-BY-SA unless otherwise noted.