Its transformation
Its speed

Its water cannon
The Buccaneer, better known as Bucky, is a supporting character in the series Jake and the Never Land Pirates. Bucky is Jake's living pirate ship and close friend.

Bucky is sentient vessel of unknown origins and how he came into the care of Jake and origins all together are currently unknown.

Bucky is a playful pirate ship that has a mind of his own and communicates through the ringing of his bell though this is fully understood by Jake and the others. Most of his roles in the show are rather minor with a few exceptions in which he uses his features to assist Jake and his crew. Despite his often small roles, Jake, Izzy, Cubby, and Skully deem Bucky their greatest treasure.

Being a ship that's self-aware,Bucky is able to sail without anyone at his helm and can freely open his hatches,chambers,door at will.

One of Bucky's most significant roles to date is the episode "Bucky Makes a Splash". Here, Bucky is stolen by Captain Hook who needs a new ship to find a sunken treasure. Jake and his crew sneak onboard Bucky to defeat the pirate but instead, the Captain gets the upper Hook until Bucky washes them away with his water cannon.

Another episode centered around Bucky was "Bucky's Anchor Aweigh!". Here, Jake, Izzy, Cubby, Marina and their friend the Purple Octopus planned on giving Bucky a golden anchor as a gift. However, Captain Hook and Mr. Smee swipe the anchor taking it back to The Jolly Roger. Enraged, Bucky sails off in top speed after the ship, leaving Jake and the crew behind. Hook manages to lose Bucky but the Never Land pirates manage to catch up to him using a small boat. Once onboard Bucky, they travel to the Jolly Roger and takes back the anchor.

In the episode "Undersea Bucky!",When the light of the mermaid dominated Neptune City vanishes, Marina was called forth to find a solution to the problem, Jake, Cubby, Izzy, Skully agreed to help Marina,but were briefly puzzled how they would reach the bottom of the Never Sea. Bucky reveals to his crew-mates that he has the ability to turn into a submarine.Allowing Jake and his crew to follow Marina to find he cause of the lights disappearance.Meanwhile Captain Hook and his bumbling crew are searching for the Jolly Roger's missing anchor, when Hook witness Jake and crew dive below the depths of the Never Sea in Submarine Bucky. Hook and Mr. Smee soon follow, using diving suits to discover what ever undersea treasure they may be after.

In the special episode "Jake and the Never Land Pirates: Jake Saves Bucky", Captain Hook forces Jake and his crew to race the Jolly Roger for the ownership of Bucky. Naturally, Hook decided to cheat, and Bucky was owned by the villainous pirate. Jake, Izzy, Cubby, and Skully call Peter Pan for help. They learn that if they can retrieve the golden bell, Bucky would be theirs once more. The crew set out to the Island of Bell and battled a fire-breathing dragon to obtain said bell. They head back to the Jolly Roger, retrieve Bucky, and all is well.

In the episode "Bucky's Treasure Hunt",Bucky uncovers a treasure map leading to the fabled Treasure Bright, a powerful ship’s lantern buried deep within the bowls of Anvil Mountain. Bucky transforms into a digging machine refereed to as Burrowing Bucky and tunnels underground to help Jake and crew recover the treasure. Unknown to Jake and his mateys, Captain Hook and his scurvy band spot them on there quest and quickly pursues them through the depths of Anvil Mountain.

In the episode "F-F-Frozen Never Land!" with Never Land covered with ice and snow and Skully has caught the Birdy Flu. The only means to cure his illness is the heat of the Fire Red Rubies, located in Fire Red Ruby Valley. With the assistance of their penguin friend Percy, Jake, Izzy and Cubby make their way through a frozen Never Land, aboard Bucky who has turned into a sled allowing the pirate team to sail across a frozen Never Sea as they pass by the Jolly Roger, which was stuck with in the ice. Jake offers to help Captain Hook, freeing his vessel from the ice, but the captain refuses. Overhearing Jake and his crew on the quest for Fire Red Rubies, Hook and his crew, equipped with Whirly-Hooks, make their way to Never Land and claiming the rubies to free the Jolly Roger.

Bucky played a key-role in the episode "March Of The Lava Monsters". When Jake and his crew soon become aware of Chief Molta and his minions and soon attempt to stop them but Chief Molta and the Lava Monsters proved to be too formidable at the young pirates first attempts to stop them, it wasn't until witnessing the lava monsters reaction to water as Hook and his crew try to reclaim the Fiery Eye of Molta. Jake and his crew used water cannons and bucket luring Chief Molta and his minions out of the jungle and onto the beach towards the Never Sea. Chief Molta soon became aware of the young pirate's plan, stopping his minions from falling into the sea and fuses with them into a larger more powerful "Mega Molten Monster". With the new treat, Jake and his crew were forced flee to safety with Molta in pursuit, Jake and his mates lose the monster by hiding in a within the jungle brush as Molta makes his way back to Belch Mountain. Meanwhile, Hook prepares to confront the monster in a suit of armor to reclaim the Fiery Eye of Molta but he is merely crushed with little effort or notice by Molta who send Smee, Sharky and Bone fleeing in panic to safety.Finally back at Belch Mountain, Molta attempts to bring all the lava within the volcano to surface but he is soon interrupted by Jake and his crew return with Bucky, using his the power of his super scooper to retrieve a large amount of water to put the giant lava monster out for good, cooling it body down and destroying the Fiery Eye of Molta as the Mega Molten Monster turns into stone and crumble away into a lifeless pile of rubble.

Bucky makes regular appearances in the shorts ringing his bell before Jake starts his pirate lesson of the day. Bucky is also featured as one of Jake's lessons in the episode "Go, Bucky Go!", Jake teaches the viewers how to sail Bucky to escape from Captain Hook. Bucky makes a brief appearance in the episode "I've Got my Sword", as Jake frees Bucky's anchor with his sword.

Bucky makes his first appearance in the spin-off in the episode "Stormy Seas", while Jake and his crew are sailing through a stormy Never Sea to the next Pirate Pieces of Eight located at Trident Rock. Captain Hook and Mr. Smee are on their trail for the pirate piece as well. Bucky proved too fast for Hook, but the captain refused to be bested yet again by the puny pirates. Armed with his cannon hook (Boat Buster hook), he blasts a hole into Bucky causing him to sink. While Jake and his crew repair Bucky, they needed one more piece to patch him up, when they spot the Pirate Piece of King Neptune they were searching for and manage to fish it out of the Never Sea before Captain Hook could and use it to fix Bucky. Captain Hook tries one last attempt to reclaim the Pirate Piece armed once more with his Boat Buster hook, but thanks to the Pirate Piece of King Neptune, the blast is deflected right back to Hook, causing a massive tidal wave and forcing Hook and Smee to flee.

Bucky reappears in the episode "Hideout Hijinks!". Jake and crew try to uncover the magical Pirate Piece hidden within Pirate Island. Unknown to Jake and his crew at the time Captain Hook manages to stumble inside the hideout and finds himself aboard Bucky in his grotto. As Hook tries to search for the Pirate Piece, Bucky knocks Hook off him with one of his water cannons.

Bucky has regularly appeared in books, various comics, and other printed stories in the series. Most of his roles in the books are similar to the show are rather minor with a few exceptions. One of Bucky's most significant roles Bucky Makes a Splash! based on the previously mentioned episode and Jake Saves Bucky.

In the Disney Junior book Mama Hook Knows Best: A Pirate Parent's Favorite Fables, one of the tales Mama Hook reminisces about is a great race between Bucky and the Jolly Roger.

Bucky has various appearances in many video game titles over the years. In the Disney Junior online game "Jake's Heroic Race" based upon the events of Jake Saves Bucky. Bucky has to race against the Jolly Roger. However, there is one major difference between Jake's Heroic Race and Jake Saves Bucky. In Jake Saves Bucky, Bucky loses the race after Captain Hook gets him stuck in a grappling hook and catches the winning flag, resulting in Jake and his crew retrieving the Golden Bell as a second chance to save him. In Jake's Heroic Race, Bucky wins the race to Eagle Island, however, the Golden Bell is the final task Jake has to fulfill otherwise Hook will take him.

In the online game "Jake's Skate Escape." Jake and his crew most reach Bucky by riding their skateboard through three locations on Never Land before Captain Hook can claim the skateboard for himself. In the "Jake's Never Land Pirate School App" the player can learn how to sail Bucky through various obstacles across the Never Sea.

In the game "Bucky's Halloween Haunt." Bucky serves as the stage and his various water cannons and features can be used to frighten Hook and Smee as they attempt to steal Jake and his crew Halloween treasure.

Bucky plays a major role in the LeapTV™ Disney Jake and the Never Land Pirates Educational, Active Video Game during the "Ship Shape" segment the player most sail through the Never Seas for treasure, and steer Bucky toward shapes. Launch his water cannon to throw Captain Hook off course.

Bucky is seen with Skully atop of him in the show as a part of Jake and the Never Land Pirates' set.

Bucky reappears in the live musical stage show after reclaiming Cubby's map from that sneaky snook Captain Hook with the assistance of Peter Pan. Jake and his crew make their back to Never Land to continue the search the treasure hidden inside a mysterious volcano. But Hook and his crew soon arrive aboard the Jolly Roger and a race back to the island commence. 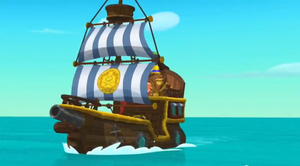 For more pictures and screenshots of Bucky, click here.

Retrieved from "https://jakeandtheneverlandpirates.fandom.com/wiki/Bucky?oldid=91676"
Community content is available under CC-BY-SA unless otherwise noted.