Buccaneer's Bluff is a location on Never Land featured in the Disney Junior animated series, Jake and the Never Land Pirates.

Buccaneer's Bluff first appeared in the episode special "Peter Pan Returns".Jake and his crew along with Peter Pan head to Never Land on the search for Peter's shadow when they reach Shipwreck Beach they find message from Captain Hook learning that cranky crook has captured Peter Pan's shadow and if they want it back they'd have to venture to Buccaneer's Bluff. On the trail to Buccaneer's Bluff Hook left traps for the sea pups and Peter but with clever thinking, they slipped through the tripwires and confronted Captain Hook and his crew. Hook informs them he'll only return Peter shadow back if he'd leave Never Land and never return taking Jake and his crew along with him. Peter rejects the offer resulting in Hook and his crew taking the shadow to The Valley of Shadows. 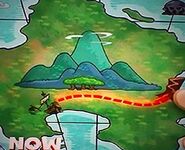 From Shipwreck Beach to Buccaneer's Bluff

Add a photo to this gallery
Retrieved from "https://jakeandtheneverlandpirates.fandom.com/wiki/Buccaneer%27s_Bluff?oldid=94544"
Community content is available under CC-BY-SA unless otherwise noted.