Playing, exploring with Cubby and his mates

Brightly the Firefly is a recurring character from Disney Junior's television series Jake and the Never Land Pirates. He's a Never Land firefly and Cubby's pet. His vocal effects are provided by Dee Bradley Baker.

In the episode "It's a Winter Never Land!", Brightly and a few other fireflies can be spotted next to Sandy the Starfish attending Jake, Izzy and Cubby's holiday celebration.

Brightly return in the special Jake and the Never Land Pirates: Jake Saves Bucky Jake and his crew use the firefly to light their beacon in the Never Land sky so they can summon Peter Pan to help them get Bucky back from Captain Hook.

Brightly reappeared in the episode "The Lighthouse Diamond " to light the way as the sea pups prepare to see the midnight sunflowers with Red Jessica on the far side of Pirate Island. Brightly help find the Lighthouse Diamond after Captain Hook attempted to swipe it and lost it the Gemstone Pit.

Brightly reappeared in the episode "The Never Sands of Time", Cubby reminds his mates not to forget Brightly and his firefly friends will perform a light show on Pirate Island. Later Brightly and his firefly friends assist Jake and his crew distracts the Sand Serpent allowing the pirates the chance to restore the Never Sands of Time back to its stand.

Brightly makes a brief appearance in the episode "Pirate Ghost Story", while helping there new ghost friend Captain Treasure Tooth find his golden figurehead they need to journey to Skull Rock. Once at Skull Rock, they had to find a way to light the eyes of the rock formation to light the way to the next clue. Jake suggests they summon Brightly to light the path. Brightly doesn't accompany the crew on the rest of the adventure.

Brightly makes a brief appearance in the episode "Pirate Fools Day!",Peter Pan's Shadow is pooling pranks on the inhabitants of Never Land. Brightly and his firefly friends are summoned to help deal with the evil shadow pirate,Shade.

Brightly is featured in the application"Jake's Never Land Shapes and Patterns." It’s a starry night on Pirate Island, and Jake, Izzy, and Cubby are going on a treasure hunt with their new friend, Brightly the Firefly. But Captain Hook has overheard their plans and wants to get to the treasure first. It’s up to you to help the crew think fast and find the spots on Cubby’s map. The plot of the game is loosely based upon the episode "The Golden Twilight Treasure."

Brightly is featured in the Disney Junior online game "Jake's Bedtime Treasure Hunt."The player controls Brightly's action by helping Jake and his crew reclaims there Bedtime treasures from Captain Hook who has hidden them within the darkness of Never Land. Brightly can use his light to uncover the hidden treasure as well as turn it off to prevent Hook from finding him. 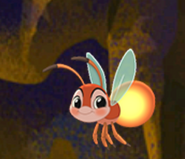 Retrieved from "https://jakeandtheneverlandpirates.fandom.com/wiki/Brightly_the_Firefly?oldid=90820"
Community content is available under CC-BY-SA unless otherwise noted.