Jake and the Never Land Pirates Wiki
Register
Don't have an account?
Sign In
in: Characters, Males, Humans,
and 4 more

"Attack Of The Pirate Piranhas"

To capture troublesome wild animals and relocate them

"Crikey!"
"By jingoes! This marauding monster must be stopped."
"Aw, you heard me song! I never let a wild animal get away! I'll trail him, trap him and transport him to another land, safe and sound. "

“I'm, Brewster, the best beast trapper and I never let a wild animal get away”
―Brewster

Brewster the Beast Trapper is a character from the Disney Junior animated series, Jake and the Never Land Pirates. He is a legendary wildlife trapper and explorer who hasn't met a beast that was too much for him to handle. He is voiced by Ryan Kwanten.

Brewster is a dashing swashbuckler who is well known for being a friend to every wild animal but if their a creature causing trouble he'll capture it and relocate it to a safer place.

Brewster first appeared in the episode "Tick Tock Trap", where he is hired by Captain Hook to capture and rid Never Land of Tick-Tock the Crocodile allowing Hook to finally be free of the dreaded reptile and claim the treasure at the bottom of Crocodile Creek. Unknown to Hook and his crew at the time Jake and his crew have heard everything and were determined to convince Brewster that the croc belongs in Never Land, and that Hook is the real threat. But once the young pirates reached Crocodile Creek Brewster had already set a baited trap waiting for Tick-Tock, who was swimming back into the creek from the open Never Sea.Skully quickly set off the trap while Jake kept Tick-Tock distracted with a snack. When Brewster returned to the trap, he discovered Skully, who tried to convince Brewster that the croc isn't as bad as he seems, but this is short-lived when Tick-Tock emerges from the creek, sending Brewster fleeing into the Never Land Jungle. Jake and friends soon set into the jungle in search for Brewster, when they come across another one of the beast trapper's traps and the crocodile was once again drawn to the bait. Using a log like a catapult, Cubby is sent flying into the air. He drops a coconut into the pit trap, revealing it to Tick-Tock, much to the frustration of Brewster, who storms out but is later sent fleeing again when the croc attempts to devour him. Brewster soon returns to Crocodile Creek, using an alarm clock to lure Tick-Tock into a cage aboard his boat. Jake and his crew finally confront Brewster, pleading with him not to take the croc away, and that Hook is only using Brewster to claim the treasure at the bottom of Crocodile Creek. Brewster was a little wary to trust the young pirates since he was warned by Hook earlier about them. But sensing the young pirates care so deeply for wild animals, he agreed to let the crocodile go. Unknown to Brewster, Mr. Smee, Sharky and Bones try to escape with Brewster's boat and the crocodile. But Brewster, with the assistance of Jake and his crew, reclaim his ship after freeing Tick-Tock. Meanwhile, Captain Hook was further downstream, believing Brewster has finally rid him of the cursed crocodile. Hook discovers the golden crocodile tooth at the bottom of the Crocodile Creek but this is short-lived when Brewster captures the captain, leaving him dangling over the creek and at the mercy of Tick-Tock, who attempts to devour Hook, he rips a hole at the bottom of Hook's butterfly net-hook releasing the golden tooth back into the creek.

Brewster is last seen accompanying Jake and his crew back to Pirate Island and removing a bilge rat from Bucky as the young pirate team places their gold doubloons into the Team Treasure Chest.

Brewster reappears in the episode "The Tale of Ratsputin", Jake and his crew team up with Brewster to try and capture Ratsputin a legendary giant rat-like creature that no one has ever seen."with the help of Jake and his crew Brewster was able to catch a Ratsputin. They initially thought Ratsputin was a big rat, but Captain Hook and Mr. Smee actually made a costume of Ratsputin to prevent anyone from finding the treasure they uncover.

Brewster reappears in the episode "Attack Of The Pirate Piranhas" while joining Jake crew aboard the Mighty Colossus when the group spot Captain Hook and his crew being chased by a school of hungry Pirate Piranhas. Brewster and the rest of Jake's crew come to Finn the Mer-Boy's aid when the piranhas attempt to attack him. Brewster and the others are last seen devising a plan to lure the vicious Pirate Piranhas away from Mermaid Lagoon. 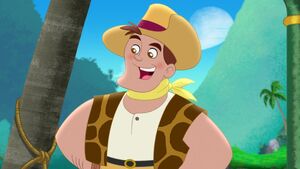 For more pictures and screenshots of Brewster the Beast Trapper, click here.