Jake and the Never Land Pirates Wiki
Register
Don't have an account?
Sign In
Advertisement
in: Characters, Animals, Males,
and 3 more

View source
watch 01:36
We're Getting Mutants in the MCU - The Loop
Do you like this video?
Play Sound

Not much is known about Blinky and how he came into Mr. Smee's care. However, the two seem to have a close bond.

Blinky is a playful, friendly and lovable little lizard who is always kind to those he loves. He likes almost everybody he comes in contact with and shows affection by sticking his tongue on those he like as revealed by Smee when he greets Captain Hook for the first time and again later in the same episode. Despite his small size Blinky has a voracious apatite, as displayed when he snatched up Jake and his crew's snacks during their fishing trip and later at the end of the episode he scarfs down the whole codfish casserole Smee prepared for Captain Hook. Blinky also displays he also quite adventurous and somewhat mischievous nature using his camouflage ability to sneak off of the Jolly Roger when he is left in Hook, Sharky, and Bones care while Smee prepares Hook's codfish casserole.

Blinky first appeared in the episode "Mr. Smee's Pet". Mr. Smee first introduces Blinky to Sharky and Bones, who never seen a chameleon before, mistaking Blinky for a cat, much to Smee's amusement. Smee then shows his crew-mates Blinky's ability to camouflage into his surrounding, which awes and surprise Sharky and Bones. Captain Hook storms up on deck to see what his crew where fussing about when Smee introduce Hook to Blinky. Hook wasn't very impress with the silly looking lizard, but Blinky seemed fond of Hook, affectionately sticking his tongue on Hook's nose, much to the captain announce. Hook soon orders Smee to prepare his favorite dish, codfish casserole. Smee was delighted to make Hook's favorite dish, but Smee needed someone to watch Blinky while he was cooking. Captain Hook quickly appointed Sharky and Bones with the task of looking after Blinky, as he guides Smee down to the Jolly Roger's galley. Meanwhile, Blinky decides to go ashore, sneaking off of the Jolly Roger into the Never Land Jungle under Hook and his crew's watch. Sharky and Bones soon inform Hook that Blinky is missing. Knowing that Smee would stop cooking his meal if anything would happen to his precious pet Hook, Sharky, and Bones head ashore to find the mischievous reptile. Captain Hook spots Blinky with Jake and his crew, believing that the sea pups stole Blinky. Meanwhile, Jake and his crew were planning to go fishing at Pegleg Pond, when Blinky runs away with Cubby's map and later Jake's sword. While the pirates try fishing at Pegleg Pond, unknown to them at the time Blinky, eats all of the snacks Izzy prepared. While searching for the snack thief, the young pirates bump into Hook, Sharky and Bones, believing they were the snack snatchers, but Hook soon explains he wasn't the thief and that he was searching for Mr. Smee's pet. Hook and his crew join forces with Jake and his crew to find Blinky, returning him back to the Jolly Roger. They get back just in time so Smee never knew that Blinky was missing.

Blinky is featured alongside Jake, Izzy, Cubby, Snappy the Hermit Crab, a Never Dolphin and the Never Bird on a cover of the Disney Junior Magazine.

Blinky appears in the Seashell Beach level in the Map & Spyglass class segment of Jake's Never Land Pirate School App. The player can learn how to navigate Never Land with Cubby and then use the spyglass to find exciting treasures with Jake.

Blinky with Sharky and Bones 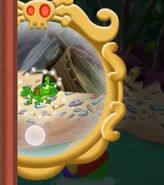