"The Key to Skull Rock"

Brute strength,teeth, tail
The Big Blue Whales are minor recurring characters featured in the series Jake and the Never Land Pirates. They are large blue Sperm Whales that inhabit the Never Sea and the primary inhabitants of Blue Whale Way. Their vocal effects are provided by Dee Bradley Baker.

The Big Blue Whales first appeared in the episode "The Key to Skull Rock " Jake, Izzy, Cubby and Skully journey to Skull Rock to unlock a door with a keygiven to them by Peter Pan. Unfortunately for Jake and his crew, Captain Hook has his eyes on the skeleton key and swipes it from the sea pups forcing Jake and his crew to pursue the Jolly Roger into Blue Whale Way which a few of the whales blocked Bucky's path causing Hook to gain a huge lead to the Never Sea Twin Tunnel and onward to Skull Rock.

In the episode "Treasure of the Tides" Izzy was testing out her new mermaid tail with Lucille the Seal,Marina and Stormy before they set off to find the "Treasure of the Tides Captain Hook overhears them and order Sharky and Bones to block the Mermaid Lagoon using the Jolly Roger. However, Lucille manages to slip pass Sharky and Bones and recruit the help of two blue whales to force the Jolly Roger out the way so Izzy and the mermaids could catch up to Hook and Mr. Smee.

While none of the whales make a physical appearance in the episode "Season of the Sea Witch",Captain Hook and Mr. Smee paddle-boat is disguise as a whale allowing them to follow Jake and his crew to Pirate Princess Island in a attempt to steal the Pirate Princess's treasure.

In the episode "Captain Hook's New Hobby" Mama Hook suggests her son find a hobby, as it may help him find a treasure. Captain Hook and his crew try various means during the musical number to find the cranky captain the perfect pastime but nothing seem to work. Suddenly Jake and his crew arrive on Never Land. Hook's crew informs them of their predicament with trying to find Hook a hobby. Jake and his crew offer to help Hook. Captain Hook is reluctant to receive aid from the puny pirates but can't resist the chance for treasure and accepts. During Izzy's turn, she suggests whale riding with the aid of a Big Blue Whale named Bertha. Izzy warns Hook that he must not speak so loud while riding Bertha because she is very sensitive of loud sounds at first everything seems to go as plan until Hook began to showboat in front of his mother he orders Bertha harshly to follow his command, ignoring Izzy's warning to speak softly only for the whale to panic, bucking the captain off her back into the air. Luckily for Hook Jake and Bucky manage to catch him before any harm could happen to him.

In the episode special, "Jake's Never Land Rescue". The Guardian informs Jake and his crew that only the pirate who truly believes in himself can save Never Land from vanishing completely, Jake must break off from the rest of his crew and go alone to save the Forever Tree. Unknown to Jake at the time the magical ball of light sent by The Guardian to guide him on his quest to save Never Land was Tinker Bell. And furthermore, the Guardian was none other than Peter Pan, as he and Tink were testing Jake, for one day, he'll become Never Land's guardian. Peter Pan gives Jake the power to fly without pixie dust and invites Jake to explore the worlds beyond Never Land but he'd have to part with his friends.

While flying with Tinker Bell and Peter Pan they pass by a Big Blue Whale, Jake couldn't shake the feeling his crew may need his help and quickly soars back to Pirate Island. Jake was right to worry Captain Hook had returned, trapping Izzy, Cubby, and Skully in a cage and attempted to smash the Team Treasure Chest open until Jake, Tinker Bell, and Peter Pan intervene.

While not having anything to do with the plot of the episode two Big Blue Whales make a brief cameo in the episode "Jake's Royal Rescue", one can be spotted during Queen Coralie's musical number. Another whale is briefly seen fast asleep blocking Queen Coralie way through the depths of the Never Sea. It quickly moves out of her way when she asked.

The Big Blue Whales reappear in the episode special"Battle for the Book",a pod of whales can be spotted during the musical number Never Land Ahoy when Jake and his crew return to Never Land from London with Wendy,John,Michael and Nana to rescue Wendy's Book from Captain Hook.

The Big Blue Whales reappear in the episode special "The Great Never Sea Conquest". When the evil Mer-wizard, Lord Fathom is released from an underwater prison, he sets out to take over the Never Sea by awakening the legendary giant, three-headed serpent, the Strake. The dolphins were among the various sea creature being control by Lord Fathom during his hostile take over of the Never Sea. During the final phase of the battle between Jake and Lord Fathom,King Neptune appears and tells Jake that all he needs to defeat Fathom and the Strake is to believe in himself. Using the powers of his sword, Jake finally defeats Fathom and the Strake. He then re-imprisons the Strake and destroys the DarkLight Emerald, freeing Queen Coralie, Marina, Stormy, and the sea creatures. The Big Blue Whales are last seen among the various sea creatures chasing Lord Fathom and Sinker away.

Big Blue Whales appears in the storybook adaptation of The Key to Skull Rock. Loosely based on the episode of the same name. After receiving a message from Peter Pan, Jake and his crew set off for a treasure hunt to Skull Rock. But that old codfish Captain Hook takes the key and leads Jake on a chase across the Never Sea. The Big Blue Whales briefly block Jake and his crew's path as they try sailing past Blue Whale Way.

A Big Blue Whale makes a minor appearance in the book Pixie Dust Away! Izzy recalls how useful her Pixie Dust is in her adventures with her mateys. One of the events she recalls is from the book Ahoy, Izzy.

The Big Blue Whales were among the various sea creatures being controlled by Lord Fathom in the storybook based upon the episode special The Great Never Sea Conquest .

The Big Blue Whales reappears in Jake's Never Land Pirate School App. They are featured in the Sailing Class segment in the Blue Whale Way level. Bucky and Jake can fire beach balls to distract the Blue Whales and Never Dolphins, allowing Jake to safely sail past.

The Big Blue Whales appear as one of the various stage hazards swimming within the Never Sea that Bucky must steer away from in the online game "Journey Beyond the Never Seas" during the Treacherous Sea segment.

Whale has a Tummy ache

Izzy and the Whale 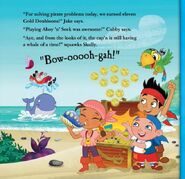 Captain Hook and Mr. Smee paddle-boat disguised as a whale.

Retrieved from "https://jakeandtheneverlandpirates.fandom.com/wiki/Big_Blue_Whales?oldid=90858"
Community content is available under CC-BY-SA unless otherwise noted.