Start a Wiki
Big Ben is a well-known clock tower located in London, England. It has all the twelve Roman numerals in a traditional way. It also has the power of light only during the night. A prominent world landmark, it was featured in the original Peter Pan film.

Big Ben first appeared in the special episode "Battle for the Book". It is first seen as Jake and his crew arrive in London during the song "London Ahoy" to stop Captain Hook from destroying Wendy Darling's book of Never Land. Jake and his crew set off on Bucky to find the Jolly Roger, which has become lost in the fog surrounding London. During the search, Michael begins to show signs of forgetting about Peter Pan and Never Land. When they find Hook near Big Ben lost in the fog surrounding London. The team is forced to split up from Bucky to confront Hook on the Jolly Roger. In the scuffle, Hook escapes to the streets of London below, and while Jake, Wendy, Izzy, and John pursue him, Cubby, Skully, Michael, and Nana stay on the Jolly Roger to deal with Smee, Sharky, and Bones. During the pursuit, John begins to show signs of forgetting about Never Land as well.

Big Ben only appearance in the printed media is the storybook adaption of Battle for the Book.

Big Ben only video game appearance in the series is the first level of the Disney Junior online game "Jake's Lost Story Quest." playing a similar role to "Battle for the Book",Captain Hook goes to London to steal Wendy's book filled with all of the adventures of Peter Pan, so Jake, Izzy, Cubby and Skully go to London to rescue it. Big Ben makes an appearance on the London level Jake and the Darling siblings past by it while collecting the various pages of Wendy's storybook while trying to evade Captain Hook. 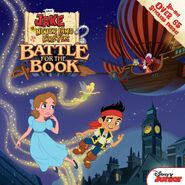 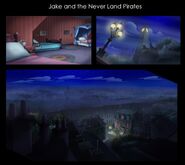 Retrieved from "https://jakeandtheneverlandpirates.fandom.com/wiki/Big_Ben?oldid=90899"
Community content is available under CC-BY-SA unless otherwise noted.