Jake and the Never Land Pirates Wiki
Register
Don't have an account?
Sign In
Advertisement
in: Locations, Mountains, Locations in Never Land

Belch Mountain is a large, active volcano on Never Land next to Never Peak featured in the Disney Junior animated series, Jake and the Never Land Pirates. It is said to be one of the most dangerous locations in Never Land.

Belch Mountain makes a cameo appearance in the episode "Rock the Croc!", when Jake and his crew receive a map and message in a bottle from Peter Pan showing them the way to Pirate's Plunge where they can cool off. Belch Mountain can be seen on the map.

Belch Mountain reappears near the end of the episode "Captain Hook is Missing!". Captain Hook has gone missing, forcing Mr. Smee, Sharky and Bones to join forces with Jake and his crew in a search all through Never Land to find their missing captain. After a long search, they finally find Hook, who is sleeping walking up Belch Mountain and almost falls into volcano, until he was woken up by Belch Mountain's gasy belches. Hook, confused about how he ended up on Belch Mountain, tried to gather his bearings, but the ground gives way under Hook, sending the captain plummeting into the fiery maw of the volcano. Luckily for Hook, he is quickly rescued by a pixie dust-powered Jake, who manages to catch Hook just in time and fly them both to safety.

Jake and his crew visit Belch Mountain in the episode "Cookin' with Hook", to retrieve the "Lava Beans", the second ingredient in the "Shipwreck Stew" on Jake and Hook's list for the Thanksgiving dinner. Hook and Smee beat the young pirates to the volcano thanks to Smee's shortcut, but in his rush to get the beans for Mama Hook, Hook stumbles on the volcano, getting his hook caught in its wall. Smee frees his captain from the volcano, but releases the lava flow, trapping them in the process, only to be rescued by Jake and his crew.

Belch Mountain returns in the episode "The Golden Smee!", where Mr. Smee swipes the cursed golden statue and takes it to the top of Belch Mountain to destroy it, in order to protect Captain Hook and his crew from the idol's curse. Jake, Izzy, Cubby and their puppy, Patch, soon track Smee down to the volcano. Hook pleads with Smee not to destroy the golden Smee, but Mr. Smee tries to warn Hook that the treasure is not worth the curse. However, Captain Hook refuses to lose his golden treasure, as Hook and his crew fight over the idol, it causes the bad luck to activate, sending the pirates plummeting into the volcano. As Hook and his crew dangle above the lava, the idol falls into the fiery depths of Belch Mountain. Izzy soon comes to Hook and his crew's aid with her pixie dust, flying everyone to safety. Belch Mountain is last seen at the end of the episode, revealing that the golden Smee has survived the fiery depths of the volcano as it erupts, sending the golden idol soaring into the sky and plummeting into the Never Sea with the rest of the lost treasure of the Smees.

In the episode "Captain Gizmo", Captain Hook takes control over Jake and his crews' new robot friend, Captain Gizmo, to retrieve the treasure of Belch Mountain that lies deep within the volcano, which proved to be too dangerous for Hook's bumbling crew. Gizmo does as he is told, making his way through the bowels of Belch Mountain to the treasure, but as Gizmo makes his way back across a lake of lava, his power begins winding down. Jake and his crew luckily manage to catch up to Hook. Using her pixie dust, Izzy rescues Captain Gizmo from the lava, but before the pirates could go Belch Mountain, it threatens to erupt, sealing them within the volcano. Cubby quickly winds up Captain Gizmo, restoring the mechanical pirate power, who rescues both the young pirate team and Captain Hook.

In the episode "Trouble on the High Sneeze", Pip the Pirate Genie's incessant sneezing was caused by Belch Mountain's dusty burps, affecting the genie's ability to do magic. Jake and his mates set out to Misty Cove, to which its magical mist will cure Pip of his sneezes.

In the episode "The Never Land Coconut Cook-Off", Captain Hook's giant soufflé monster kidnaps Izzy and carries her to the top of Belch Mountain. Fortunately, Jake, Cubby, and Skully, along with Misty the Wonderful Witch, follow them to save her. They use Izzy's popcorn machine to create a loud noise to pop the soufflé monster. This works and Izzy wins the Coconut Cook-Off.

In the episode "Jake's Mega-Mecha Sword", while preparing for the Belch Mountain Parkour Race, Jake uncovers the Mega-Mecha Sword within the brush of the Never Land Jungle. Marveling at his newly acquired mechanize blade's various features, Jake begins to neglect his old sword that Peter Pan bestowed upon him. Jake was not the only one taken by the Mega-Mecha Sword's wonders, for Captain Hook also had his eyes on the sword's various features that rival his collection of hooks, and was determined to claim the sword as his own. Once Jake finally reaches the finish line atop of Belch Mountain, Hook manages to take the Mega-Mecha Sword for himself, leaving Jake to plummet into the volcano. Jake pleads to Hook to help him out of the volcano, but the volcano starts rumbling, forcing Hook and his crew to flee to safety while leaving Jake to his fate. Fortunately, Cubby, Izzy and Skully arrive to help Jake, but find themselves also in the volcano, but using Cubby's map, they learned of a secret path to escape the volcano. Equipped with his old sword, Jake finds the confidence and courage to lead his crew out of Belch Mountain and later rescues Hook and his crew from the danger of the lava flow.

In the episode "The Sneaky Snook-Off", Captain Hook and Beatrice Le Beak challenge each other in various contest to determine who is the sneakiest pirate in Never Land. A race to the top of Belch Mountain was the first challenge between the villains. Le Beak gets a huge advantage in the race, using the whirly-hook she stole from Hook to cheat. After reaching the top of the volcano, Le Beak brags about beating Captain Hook in the first challenge.

In the episode special "Battle for the Book", when Captain Hook steals Wendy's book of Never Land and flees back to the island to destroy the tales once and for all. Jake and his crew pursue the captain, accompanied by the Darling siblings. Once back on Never Land, Wendy suggests they head to the hideout to determine where Hook will take the book. Jake was about to set a course for Pirate Island, but Wendy clarifies that she meant the hideout she and her brothers stayed in on their first visit to the island years ago. As Wendy leads the group across Never Land to find Hangman's Tree, she starts to lose her memory of where the tree resides. Jake manages to find the tree and John opens one of the hidden hatches, welcoming everyone inside as Jake and crew marvel at the sight of Pan's hideout. Wendy knew of another means to help them locate where Hook is taking her book, by using the tree's root tunnels. One of the tree's root tunnels lead to Belch Mountain. The group soon hear the Hook's voice leading to the Valley of Fury, one of the most dangerous locations in Never Land.

In the episode "ShiverJack", Jake and his crew plan to watch Belch Mountain erupt from a safe distance, when they notice the volcano miraculously freeze before their very eyes, setting the stage of the episode to uncover the cause.

In the episode "The Golden Hook", Captain Hook finds the legendary Golden Hook, which turns anything it touches into gold. Hook then decides to turn Belch Mountain into solid gold. After Captain Hook is defeated, the only means to reverse the effects of the golden hook was to destroy the hook by tossing into the fiery depths of Belch Mountain.

In the episode "March Of The Lava Monsters", Captain Hook and his crew search the fiery depths Belch Mountain for the Fiery Eye of Molta, a magical medallion of great power. While searching through the volcano, Hook and his crew manage to find the medallion, however, when Captain Hook tries to grab the medallion, it proved to be too hot, causing the captain to drop it into the lava, thus creating a lava monster. While Mr. Smee, Sharky, and Bones cowered in fear at the sight of the beast as it creates more lava monsters, Captain Hook initially believes that the lava monster was creating an army to aid Hook in dominating Never Land, until the lava monster spoke, revealing himself to be Chief Molta, the leader of the lava monster, who plots to turn Never Land into his fiery domain.

In the Disney Junior online game "Super Pirate Powers", Belch Mountain is the third level in Jake's adventure to reclaim the Mega-Mecha Sword from Captain Hook.

In the Disney Junior App game "Quest For the Four Swords", in order to save Captain Hook and Mr. Smee, Jake sets across the island of Never Land searching for four legendary magical swords that will open the stone door. Belch Mountain is one of the locations Jake has to travel to find one of the four swords.

Belch Mountain serves as the mysterious volcano in the live musical stage show. Jake and his swashbuckling friends, Izzy and Cubby, with a little help from Peter Pan, battle Captain Hook to unlock the treasure hidden inside the volcano. 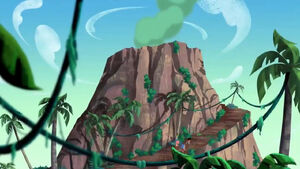 For more pictures and screenshots of Belch Mountain, click here.