Pirate
member of the League of Never Sea Captains

" Oh! But I am Beatrice Le Beak, I can take whatever I want."
"Why you have just been Le Beaked!"
"Aw, le phooey!"
"How-you-say, petite pirate jokes, eh? Time to escargot!"
"Rotten Roquefort!"
Bonjour, Capitaine. So not nice to see you.
But even I understand zat zees Lord Fathom threatens us all.


And if there is one thing I cannot stand it is zee competition!

Beatrice Le Beak is a recurring character from Jake and the Never Land Pirates. She the sneaky bird-like pirate captain whose thievery rivals that of Captain Hook. She is voiced by Teri Hatcher.

Beatrice is quite well known through the various inhabits of Never Land as being the sneakiest plunder pirate to ever sail the Never Sea. Some say she is even more cunning and underhanded then even the villainous Captain Hook.

Beatrice has light brown skin and black hair while sporting a blue hat and coat. Her most prominent feature is her large nose that resembles a bird's beak, hence her last name. However, an earlier design had her with lighter skin, red hair and red pirate attire.

Beatrice is rather greedy and cunning, having spent most of her life searching for the various treasures of the Never Sea. Beatrice is described as a greedy and obsessed person. She is completely fixated on treasure and proving she's a sneakier snook then Captain Hook; Like most villains, Beatrice is fully aware of the fact that she is a cruel villain and that people on Never Land strongly dislike her, however, she takes pride in her evil deeds feeling no remorse for her victims for the most part.

In "Captain Hook's Parrot" Beatrice makes a brief cameo as a portrait on Hook's ship of the famous pirate captain with feathered companions. This earlier design she was a redhead and wore red pirate attire.

Beatrice Le Beak made her first physical appearance in the series in the episode "Jake and Sneaky Le Beak!," where she now has black hair and wears blue pirate attire. Beatrice Le Beak's pet falcon Fast Claw swoops down and swipe Captain Hook's hat off his head who was quickly recognized by Mr. Smee as Le Beak's pet knowing that Beatrice Le Beak couldn't be far behind. Beatrice then appeared by rowboat claiming her ship was wreck, Captain Hook grants Beatrice permission to come aboard when she overhears Hook and his crew going on a treasure hunt for the Splendor Gem she takes commands of Hook's vessel the Jolly Roger leaving Hook, Smee, Sharky and Bones adrift in her rowboat. Luckily, Jake and his crew were sailing nearby and decided to help. Reluctantly, Hook accepts the puny pirates' help and they gave chase to Rainbow Falls were Beatrice Le Beak has abandon ship leaving Fast Claw to watch the ship but the fiendish falcon is tricked by Skully to leave his post allowing Hook and his crew to take command of the Jolly Roger once more.

Beatrice couldn't care less about the Jolly Roger and continued after the Splendor Gem fueling Captain Hook fire refusing to allow Le Beak to beat him to the treasure Hook gave chase and confronts Beatrice behind the falls. As the two greedy pirates battle for control of the Splendor Gem, they fall through the entrance behind the falls but are rescued by Izzy and her pixie dust losing the Splendor Gem to the Never Sea. Beatrice and Fast Claw are last seen held captive by Captain Hook and his crew and forced to walk the plank but Beatrice Le Beak and Fast Claw escape with one of Captain Hook's Whirly-Hooks.

After a long chase, Beatrice is captured yet again by the combined forces of Captain Hook and Jake's crew and Red Jessica art collection and ship have been returned. Beatrice is last seen held captive by Captain Hook and his crew, Hook plans on leaving Beatrice Le Beak stranded on a deserted island but before Hook could put his plan into motion Beatrice Le Beak makes her escape yet again with Hook's Whirly-Hooks.

In the episode Mystery of the Missing Treasure!, Jake and his crew discover that someone has stolen the Team Treasure Chest originally the young pirate believed the thief was Captain Hook and his scurvy band but none of the various clues the pirates discover on Pirate Island match Hook and his crew. Jake and his crew continue searching for clues for answer it wasn't until they discover a brown feather and ask the Sing-Songbird to identify the feather, the Sing-Songbird knew feather belongs to Fast Claw who belongs to Beatrice Le Beak Captain Hook overheard and offered his assistance to help the puny pirate team reclaim their treasure chest but this was merely a rues so he could snatch up the treasure for himself. Jake and his crew constructed a fake treasure chest on Pirate Island beach and hid among the foliage with Hook and Mr. Smee waiting for Le Beak's greed to be her undoing.

Beatrice Le Beak reappears in the episode "The Sneaky Snook-Off", After overhearing Captain Hook declares himself the sneakiest snook in Never Land. Le Beak soon challenges Hook to a Sneaky Snook-Off to determine who the true sneak is. Le Beak gains a huge advantage in the first challenge, a race to the top of Belch Mountain still using the whirly-hook she stole from Hook in the episode (Jake and Sneaky Le Beak!) to gain victory. As Beatrice gloats over her victory a frog emerges from the brush scaring Le Beak. Giving Captain Hook the advantage in the second contest crossing through Frog Hollow first. Le Beak again took the lead distracting Hook by mentioning treasure but soon find herself losing her cool once she encounters a large number of frogs gaining Hook the victory. Beatrice was furious at Hook's dirty trick as he mocks Le Beak's fear of frogs. Beatrice soon learns the perfect revenge thanks to Mr. Smee accidentally revealing Hook's fear of Tick-Tock the Crocodile. The third and final challenge takes place in Crocodile Cavern the lair of Tick-Tock Croc and the challenge is won by the snook who strikes the gargoyle gong first.

Le Beak manage to reach the cavern first and began crossing the rope bridge to the gong she wakes Tick-Tock from his slumber. Hook soon arrives shortly as he dreaded the croc was home. Le Beak gloats assured of her victory taunts Hook due to his fear of Tick-Tock. Captain Hook cuts the rope bridge sending Beatrice plummeting into the water with the crocodile. Hook attempts to ring the gong from afar using one of his hooks but Fast Claw intervenes, forcing Hook and Smee to cross the pit with Tick-Tock distracted attempting to devour Le Beak. But as Hook and Smee attempt to past them, Le Beak leaps on Hook's shoulders leaving all three pirates at the mercy of the hungry crocodile. Fortunately, Izzy manages to rescue them all using her pixie dust. With everyone safe, Le Beak and Hook still desired to ring the gong but Skully manages to strike the gong first ending the Sneaky Snook-Off. Back on the Jolly Roger Hook was still sulking due to his losing the contest with Le Beak when Mr. Smee informs him he revived a gift from Beatrice. Unknown to Hook, at the time the gift contained Tick-Tock Croc who began chasing the captain across the deck of the Jolly Roger.

Beatrice Le Beak reappears in the episode"Flight of the Feathers", as the main antagonist of the episode with the assistance of Fast Claw Beatrice attempts to plunder the treasure of the Fearsome Four hundredth mission.

Beatrice Le Beak reappears in the episode"Tiki Maskerade Mystery", Jake and Captain Hook's crews join forces to capture a thief when the Golden Tiki was stolen during the Tiki Maskerade. With the assistance of Red Jessica, they discover Le Beak was the thief. The Tiki Trees banish Le Beak from the party but she swore that they haven't seen the last of her.

Beatrice Le Beak reappears in the episode special "The Great Never Sea Conquest" She alongside Captain Flynn and Captain Frost are summoned by Jake and his crew to join forces to defeat there common threat Lord Fathom.

Beatrice Le Beak reappears in the episode "Peter Pan's 100 Treasures!" Beatrice and Captain Flynn are forced to work as a team. Flynn tries to give her a chance and ask she play fair. But true to her villainous nature she tries to foil the other contestants like Captain Hook and the other Never Land captains competing in the scavenger hunt hosted by Peter Pan.

Beatrice Le Beak's only appearance in printed media is the storybook adaptation of the episode The Great Never Sea Conquest. 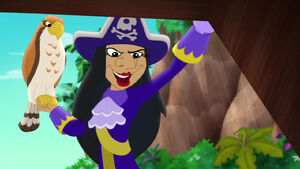 Retrieved from "https://jakeandtheneverlandpirates.fandom.com/wiki/Beatrice_Le_Beak?oldid=88833"
Community content is available under CC-BY-SA unless otherwise noted.