To retrieve his Invisibility Ring

Magic,performing in front of others

Dislike it when he fails at performing a trick,when trespassers steal his secrets

Beardini the Pirate Magician is a recurring character from the Disney Junior series Jake and the Never Land Pirates. He is a legendary pirate magician who lives on Never Land. He is voiced by Steve Valentine.

Beardini is quite known for his skill as a magician. However, Beardini seems to have disappeared from Never Land for many centuries as revealed by Captain Hook in the episode "Invisible Jake". However, it wouldn't be until the episode "The Remarkable Beardini! " reveals that Beardini didn't leave but was merely confined in a trick treasure chest with swords going through it as part of a new trick he was trying to perfect. But in the end, Beardini couldn't get out due to not reading the instructions to his latest magic trick.

Beardini is a stickler to the rule that a magician will never reveal his secrets and prevents those from learning his tricks.Beardini takes great pride in and often brags about his abilities. He hates to look like a fool and hates having others entering his lair. Later in the course of the series, he enjoys performing his magic for Jake and his crew. In the episode "Magical Mayhem!" it was revealed that Cubby has taken an interest in learning magic from Beardini and despite the young pirate's meek nature, Beardini is very patient seeing the promise in his young pupil, often reminding him he needs more confidants.

Beardini is a powerful magician, whose magic comes from his hat and his wand, but the magic he can produce—mainly due to the nature of his paraphernalia and his state of mind—is limited to stage magic, conjuring, and comedic effects. These include (but are not limited to) conjuring masses of flowers and cards to distract opponents, polymorphing people and objects at will, enlarging his glove to catch is opponent, conjuring door traps, animating lifeless objects, and making objects disappear into his hat. His magic is highly versatile and often catches others off guard. Beardini channels his magic solely through his magic wand, and hence he's practically powerless without it.

While not making a physical appearance in the episode "Invisible Jake", he is briefly mentioned simply as the pirate magician. While hiking through Never Land Jake and his crew discovers the Pirate Magician's Lair, which is now abandoned. Captain Hook and his crew spot the young pirate team heading inside.Mr. Smee was hesitant to enter magician's lair fearing to face his wrath. Hook was not afraid believing that Beardini had left the island ages ago. While searching through the various wonder within the magician's lair Jake come across a gold ring that turns the wearer invisible. Jake and crew decide to take the ring before it falls into the wrong hands. Captain Hook and his crew soon arrive determined to claim the ring power for himself.

Beardini first appeared in the episode "The Remarkable Beardini! ", Captain Hook and Mr. Smee accidentally set him free while searching through the magician's lair for treasure. Captain Hook tricks Beardini into believing Jake stole his Invisibility Ring. Soon Beardini confronts Jake and his crew to retrieve his ring. But during his battle with Jake, Beardini soon gets caught in one of his own tricks, allowing Jake the chance to reveals that he and his crew never meant to steal Beardini's ring and was protecting it from Captain Hook. Beardini is released from his trick just as Izzy returns revealing that Hook and Smee are making another attempt to steal Beardini's magic from his lair. Beardini teleports, himself, Jake and his crew to his lair to stop Hook and Smee from escaping with any of his magic and showing off his power at the same time by turning Hook and Smee into rabbits. Jake worried about Hook and Smee asked Beardini will they always be stuck in that form, Beardini assured the young captain that the duo will return to there original form sooner or later.

Beardini reappears in the episode "Magical Mayhem!" is set to host a magic show aboard his ship.during the show Beardini reveals one of his greatest magic trick, magical rings seeing the wonders of the rings first hand Captain Hook steals them. Beardini accompanies Jake and his crew and retrieving the magical rings Hook before he could use its powers to harm all of Never Land in the process. Beardini is last seen after his rings are returned and seeing how dangerous the rings could be in the wrong hands Beardini uses his magic to send the rings somewhere they can never be found again.

Beardini reappears in the episode "Beardini's Apprentice", Cubby wishes to learn how to do magic as good as the pirate wizard. But he happens to have some trouble. But Beardini reassures his new student that he needs confidants. But during the lesson Captain Hook and Smee attempt to sneak into the Pirate Magician's Lair to steal some Beardini's magic to help them find treasure. Beardini was furious at the villainous duo and ask Cubby to transport them out of his lair. Cubby accidentally sends Beardini away with Hook and Smee to a magical castle,Castle Castaway.Cubby along with Jake and the other pirate's journey to the magical castle to rescue Beardini, Hook, and Smee. After being rescued by Cubby, Beardini rewards the young pirate by making him an honorary pirate magician.

Beardini reappears in the episode "Tales of Captain Buzzard."He is portrayed as a Merlin like figure in Captain Buzzard's story of the Knights of the Round Tower. He sends the knights to retrieve the Golden Goblet.

While not making a physical appearance in the Disney Junior online game "Super Pirate Powers", Beardini is briefly mentioned simply as the pirate wizard. As Jake explores the Pirate Magician's Lair he uncovers Beardini's Invisibility Ring to aid him in his quest to reclaim the Mega-Mecha Sword from Captain Hook. 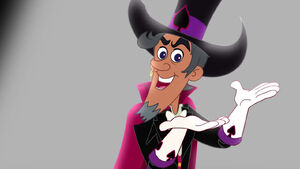 For more pictures and screenshots of Beardini the Pirate Magician, click here.

Retrieved from "https://jakeandtheneverlandpirates.fandom.com/wiki/Beardini_the_Pirate_Magician?oldid=90811"
Community content is available under CC-BY-SA unless otherwise noted.